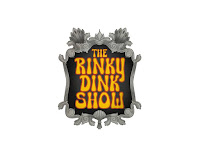 There's a new group in #TCTheater called Rinky Dink Operations - a collection of very funny people you many know from the Fringe or various other theater, improv, and/or comedy stages around town. They've begun a residency at Bryant Lake Bowl in Uptown with their Rinky Dink Show, a sketch comedy/variety show inspired by everything from Saturday Night Live to The Muppet Show. It's a lot of fun, and something different from the theater I usually see. And with the 7pm showtime and 90 minute runtime, you can be home by 9 for an early bedtime still enjoy other evening festivities that cool people do on the weekends.

There are so many people in this crew that they split it in half, with some performing this month, and some at their next quarterly show in September. Hosted by Josh Carson, the cast of the June shows includes Aisha Ragheb, Anna Weggel, Brad Erickson, Drew Tennenbaum, Kelsey Cramer, Mustafa Hassan, and Sam Landman. The show is bookended by a couple of musical numbers; the opener charmingly introduces the cast, and the closer, well, let's just say that a musical theater parody is a surefire way into my heart!

In between is a variety of entertainment, including a few songs, some stand-up, and sketches. The latter include an "e-rock-tic poetry" competition (just what you think it is), faux movies by hollywood executives trying to dream up the next fad (probably not at all what you think it is), a couple arguing over some pretty funny fake (I hope) Netflix shows, and a bit of (non-threatening) audience participation. The show is chock full of pop culture references; they even managed to work in the traumatic Target shut down that happened the day of the show.

There are three more performances of The Rinky Dink Show this month, and then watch for them to return in September (and hopefully again and again after that). If you've never been to Bryant Lake Bowl before, I recommend getting there up to an hour before showtime to get a good seat and order dinner and drinks right in the theater (available throughout the show). And then sit back and enjoy the not-so-rinky-dink show!