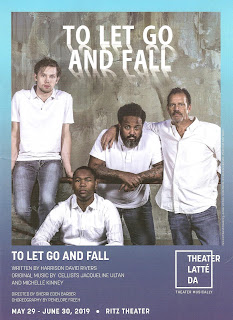 No better way to kick off Twin Cities Pride month than with a beautiful and sad love story between two men that spans time, distance, disease, memory, and music. To Let Go and Fall is a world premiere new play by Playwrights' Center core writer Harrison David Rivers, who over past few years has given us several beautifully written and meaningful new plays (see also This Bitter Earth). And because this is Theater "we don't do musical theater we do theater musically" Latte Da, this play incorporates music in such a way that the story wouldn't be the same without it. The result is a truly lovely exploration of a relationship, beautifully realized by the cast, director, and every element of design, as I've come to expect from TLD.


The play takes place by the reflecting pool outside the Vivian Beaumont Theater in Lincoln Center at three different timepoints. Four sets of actors play Arthur and Todd throughout their lives (or five if you count the cellos). The story begins with the present day 51-year olds (André Shoals and Mark Benninghofen), meeting again after 25 years. We then see scenes of when they first met and fell in love as 16-year old students (Jon-Michael Reese and Austen Fisher) in a summer intensive at the American Ballet Theatre. The final pair are the 25-year old Arthur and Todd (JuCoby Johnson and Tyler Michaels King), just beginning their success in the ballet world and happy in their relationship, until tragedy and fear and choices drive them apart. These are gay men, artists, living in NYC in the '80s - we know how that story goes. Their lives are affected by AIDS, as were the lives of so many men, particularly artists, at the time (and still today). As each Todd/Arthur pair comes on stage to begin their part of the story, they never leave, quietly observing the other versions of themselves without reaction, as if their entire story were happening right now, right here, all at once.

Cellists Michelle Kinney and Jacqueline Ultan accompany the story with their own beautifully evocative compositions, like a wordless dialogue, as they're suspended in glass boxes in the middle of the on-stage pool. The Todds and Arthurs walk around the pool, sitting on benches or balancing on the edge. A few times between scenes the cellos take over and we see Arthur and Todd as young dancers (Da'Rius Malone and Conner Horak) in a video projected onto the panels at the back of the stage that look like the windows of the theater, where subtle images of the city are also projected. The set has a cool, angular, modern aesthetic that is very reminiscent of Lincoln Center and is the perfect place for this story to play out. (Scenic designer Maruti Evans, projections designer Kathy Maxwell, projections videographer Maxwell Collyard, choreographer Penelope Freeh.)

New York based director Sherri Eden Barber makes her #TCTheater debut, and expertly navigates the multiple timelines and multiple versions of the characters. The show has a smooth and organic flow as the storyline is passed back and forth among the three pairs, and a perfect length of 80 minutes, enough to tell the full story of these characters without any extraneous material. Each pair of actors is so believable in their relationship at that specific time - new love, the ending of a relationship, nostalgia as they look back on what they had and what they lost. There's a connection between the performances so that it's easy to believe that these are the same characters at different points in their lives.

As always with Theater Latte Da, the program contains excellent dramaturgical information (dramaturg Elissa Adams) about male ballet dancers, the timeline of the AIDS epidemic, and the love story between composer John Cage and dancer Merce Cunningham, an inspiration for this play and for the characters. The title of the play is taken from a love letter from Cage to Cunningham* "this gravity elastic feeling to let go and fall together with you is one thing, but it is better to live exactly where you are with as many permanent emotions in you as you can muster."

To Let Go and Fall is a beautifully nostalgic and melancholy play. It's all-consuming for 80 minutes and leaves one with a lovely wistful feeling. See it at the Ritz Theater in Northeast Minneapolis through the end of June, with post-show discussions after Thursday and Sunday performances. Click here for more info and to purchase tickets.

*And I just learned what another lyric of RENT's "La Vie Boheme" means: "Ginsberg, Dylan, Cunningham and Cage." Nice that I can still learn new things about my favorite musical after 23 years.