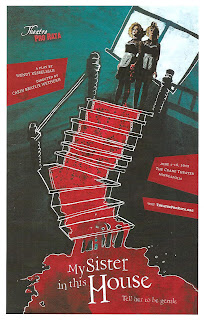 The real life Papin sisters, live-in maids who killed their employers in 1930s France, have inspired several plays, including the absurd dark comedy The Maids, and the not so much a comedy play My Sister in this House. The latter is the final production in Theatre Pro Rata's 2018-2019 season, now playing at the Crane Theater. It's real dark and gritty, with a tone that borders on but doesn't quite cross over into camp. It lets us inside the lives of the would-be murderers and explores what led up to the infamous crime, namely mental illness and the unfair treatment of domestic servants. Great performances by the four-woman cast and spot-on design make for a creepy evening at the theater.


Christine (Kayla Dvorak Feld) and Léa (Nissa Nordland Morgan) are young servants placed in the homes of the wealthy by their never seen mother, to whom they give their pay. The two are finally placed together in the home of Madame Danzard (Katherine Kupiecki) and her daughter Isabelle (Nicole Goeden), vapid creatures who spend their days playing solitaire, planning outings, and talking about fashion. Over several years a routine develops, with the servants never speaking to their mistresses, but keeping a spotless and perfectly run home. The real life sisters suffered physical abuse at the hands of their mistress, which playwright Wendy Kesselman chose not to include in the play, making the motive for murder a little less clear. Although there's plenty of verbal abuse on the rare occasions that "the girls" slip up, and Christine, the elder, seems to be mentally unstable. She is very controlling of and abusive towards her younger sister Léa, and jealous of her interactions with anyone else. In real life and in this fictionalized account, the sisters are extremely close, to an unhealthy degree. You can tell this story is heading towards a bad place, and fast, but it's still shocking when it arrives.

Under director Carin Bratlie Wethern, the excellent cast walks the fine line between gritty realism and dreamlike melodrama. All elements of design converge to increase the creep factor. The super detailed set includes all the separate areas of the home - living, dining, kitchen, the sisters' upstairs bedroom, even the all important landing where the deed was done (see also Glensheen). Large pieces of broken glass hang from the ceiling, reflecting light in unexpected and disturbing ways. Lighting differentiates the areas of the home and creates some startling effects, while the sound design includes appropriate music during scene transitions, the drip of a faucet, and the horrifying sounds of the murder. The sisters' black and white maid uniforms tell us which is the dominant one and which is more childlike, while their mistresses are dressed in colorful garish gowns. (Set design by Ursula K Bowden, costume design by Samantha Kuhn Staneart, lighting design by Emmet Kowler, sound design by Jacob M. Davis, props design by Jenny Moeller.)

My Sister in this House continues through June 16 at the Crane Theater in Northeast Minneapolis, recommended for those who like true crime murder stories that delve into the psyches of the murderers and the murdered.