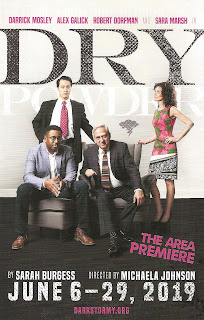 After two pretty dark and devastating plays about suicide ('Night, Mother) and child abuse/kidnapping (Blackbird), Dark and Stormy returns to comedy with the regional premiere of the new play Dry Powder. It's still dark, and not exactly light-hearted since it features some pretty horrible people working in the cutthroat world of finance, but it is funny. I didn't understand a lot of the terms and acronyms being thrown around, but I am familiar with layoffs and buyouts. Either way it's less about the business world than it is about how these four characters function within this world. As always with Dark and Stormy, there are great performances by a terrific small cast, seen up close and personal in their small studio space, with tight and clear direction (here by Michaela Johnson). It's not so much a forget your troubles kind of comedy, more of a laugh at the troubles of the world because if you don't you'll cry.

The title of the play refers not to a drug or poison or cleanser, but rather to an investment term that means cash or cash-like reserves. This successful NYC private equity firm needs to decide what to do with theirs. The boss, Rick, needs to also consider the reputation of the firm, which is being picketed and protested because they just laid off a bunch of employees of one of the companies they recently acquired, which is putting a damper on his upcoming wedding in Bali (yeah, they're that kind of people). Seth comes up with an idea to buy a family owned luggage company that will turn a profit and make them look good. He's promised the CEO Jeff that they won't lay off anyone or move production out of their California location. But Jenny, the pragmatic one, comes up with a different plan that will make more money by ignoring that agreement. Rick has to decide which path to take - the one that will boost their image in the press, or the one that will make more money and keep their investors happy.

I'm making this sound much more dry and boring than it is. It's really a battle of morals, or lack thereof (this is corporate America, guess which one wins). The play is a 90-minute debate/ negotiation/ persuasive argument between these four people who all think they know what's best and how to achieve it. None of these people are likeable, they're all pretty selfish and greedy. But it is fun to laugh at them, in a way that covers an inner angst at the dangers of capitalism and rage at the one-percenters.

Robert Dorfman is always fun to watch, as he is here as the boss Rick, making it hard to know if he's a good guy or a bad guy. Sara Marsh is wickedly funny (or maybe just wicked) as the smart and serious Jenny, while Alex Galick gets to show a little more humanity, albeit conflicted, as Seth (I do like that the woman is the heartless pragmatist while the man is the sensitive one concerned about people, in a reversal of the usual gender stereotypes). The two have a great bickering brother/sister chemistry. Also great is Darrick Mosley as the nice guy CEO of the luggage company, except that when it comes down to it there's really no such thing.

The cast is dressed in sharp business attire, the men changing ties to signify the change of a day, Jenny in a parade of tailored dresses (costume design by Lisa Jones). The sparse set design in the corridor stage space includes a massive desk, empty except for a photo of Rick's fiance, and a few chairs.

Dry Powder continues through June 29 at Dark and Stormy's studio space in the Grain Belt Warehouse in Northeast Minneapolis. Go laugh at some really horrible and heartless people.