"Spring Awakening" by The Chameleon Theatre Circle at Gremlin Theatre 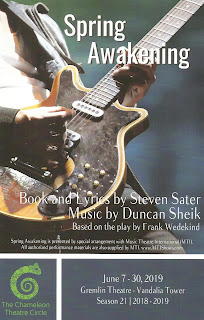 At last night's 2019 Tony Awards, Hadestown won eight Tonys (including best musical, notably the first best musical written and directed by women). Twelve years ago, Spring Awakening won eight Tonys, including best musical. Like Hadestown, Spring Awakening is based on an old story (not as old as the myth of Eurydice and Orpheus, rather a late 19th Century German play), retold in a way that feels new utterly relevant to today's world. Sadly, the issues of suicide, teen pregnancy, abortion, child abuse, and the general difficulties of being a teenager are never not relevant. The new production by The Chameleon Theatre Circle features a talented young cast, many of whom also play instruments, and brings these issues to the forefront of 2019.

Spring Awakening the musical, written by Steven Sater (book and lyrics) and Duncan Sheik (music), is based on an ahead-of-its-time German play by Frank Wedekind (Frülings Erwachen for my fellow German nerds). It was written in the late 19th century but rarely produced at the time because Wedekind so explicitly and realistically examined the sexual awakening of teenagers in a repressed society. More than 100 years later this ground-breaking play was combined with modern pop and rock music to create the ground-breaking musical. Our heroes are the teenage lovers Melchior and Wendla, and Melchior's best friend Moritz, who don't have the information they need to handle the issues they face, which has dire consequences for all three of them. Good student and popular kid Melchior thinks he knows everything, while the struggling Moritz is overwhelmed by school work, girls, his feelings, dreams, and life in general. Naive Wendla begs her mother to tell her where babies come from, and by the end of the play her mother wishes she had answered honestly. This trio is surrounded by school chums (separate schools for boys and girls of course), who are all dealing with things that teenagers deal with, but lack the tools to handle them.*

Minnesota Fringe Festival Artistic Director Jay Gilman makes his #TCTheater directing debut here and has brought some new ideas to the show, the best being to have some of the cast play musical instruments, which integrates the music into the storytelling even more. He's also cast a diverse and talented group of young actors, the youngest being just 17 (soon to be high school senior Payton Seacrist). Our star-crossed lovers (this show definitely has a Romeo and Juliet feel) are played by Lydia Wagner as Wendla, bringing some new flavor to these familiar songs (and playing a bit of keyboard), and Benjamin Rubenstein as Melchi, full of the character's almost cocky confidence, until his world comes crashing down. As my favorite character Moritz Stiefel (for whom I named one of my cats), transgender actor Henry Ellen Sansone brings a new dimension to the role of the troubled teen. While the character is not played as explicitly trans, he's definitely in transition, and thinking about Moritz as trans totally jives with the character as he struggles with gender and sexuality and figuring out where he fits in life. All of these kids are great, so open and vulnerable and willing to go there (a highlight being Suzie Juul as Ilse, beautifully singing "Blue Wind" in duet with Moritz's "Don't Do Sadness"). Grown-ups Wendy Short-Hays and Joel Raney ably play multiple adult characters, most not very nice.

In fact, the cast is so good that I wish the sound were better to really showcase their talent. All of the performers are miked, usually too loudly, with more than a few moments of distracting static and interference. In the pivotal hayloft scene, I couldn't hear a word that Melchior and Wendla said to each other over the music. I'm not sure that body mics are necessary in the intimate space of the Gremlin Theatre, with just four rows of chairs on three sides of the thrust stage. I understand this is a rock musical, but at minimum the mics could be turned down or off for dialogue scenes. The cast also uses handheld mics for most songs, which are apparently just for show. They don't change the sound at all, and would have more effect if they were working mics, creating different dynamics. As innovative as this production is in terms of instrumentation and some of the staging, I wish it were more innovative in terms of sound as well.

While five of the cast members play instruments (most notably in the beautiful opening and closing numbers), they're also accompanied by a an awesome seven-person onstage band, led by Music Director Dale Miller on piano. Choreographer Jackie O'Neil has created some energetic and beautiful movements, which the cast performs well, individually and as a cohesive unit.

Costume designer Emma Kravig has clothed the cast in the usual period school girl and boy clothing, but with a fascinating twist. All of the characters have a bit of their clothing that has words printed on it - a tie, belt, or even shoes. And the only permanent set piece is a large white tree at the back of the stage that is also covered with words (my aforementioned German nerds should note the words on the floor). Almost as if to say that words, knowledge, education is what these (and all) kids need to guide them through this complicated world (scenic design by William Slayden).

Maybe in twelve years we'll be treated to local productions of Hadestown, or Dear Evan Hansen. But for now, we have one of the biggest Broadway hits of the previous decade performed by #TCTheater artists, bringing this 100+ year old tale to today. Continuing through June 30 at Gremlin Theatre (pro tip: check out the food truck schedule at next door Lake Monster Brewing for a fun beer, dinner, and a show night).


*Plot summary borrowed from what I wrote about past productions.