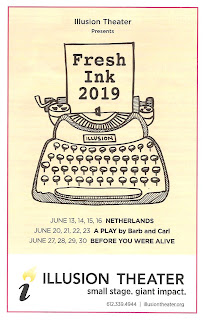 Every summer, Illusion Theater presents readings of new works. It's been way too long since I attended a "Fresh Ink" reading - three years! But I remedied that this year by attending the first of four performances of the staged reading of a new play by local playwright Jeffrey Hatcher. And I hope to get to one or both of the other new plays, also by local #TCTheater artists Carlyle and Barb Brown and Beth Gilleland. Like readings at the Playwrights' Center, this series is a great way to experience a new play and participate in the development process. In a way, we're the test audience, to see how the play lands and allow the playwright to make adjustments if necessary. Readings are only $10 each and run Thursday through Sunday evenings for the next three weekends (click here for more info).

Below is some information about each of the three plays, as well as my thoughts on the one(s) I've seen.

NETHERLANDS
June 13th - 16th, 2019
A NEW PLAY BY JEFFREY HATCHER
STARRING SANDRA STRUTHERS, DIRECTED BY ELLEN FENSTER
In an airplane over the Atlantic is a woman en route to The Netherlands to find out if her sister is alive. She does this once a month. She’s been doing it for years. Her sister lives in the upper room of a house in Amsterdam. If there’s a key on a string dangling from the window, she’ll know it’s safe to go up. If not, her sister is dead. This is her last visit. Two sisters. Two stories. One actress.
My thoughts:
This is a fascinating play, with Sandra Struthers playing two very different sisters as they tell us the story of their lives. One likes to travel the world, the other never leaves her room. The latter sister has serious debilitating mental illness, including some sort of OCD that makes her fear garbage and "infection," which eventually leads to her not wanting any contact with her family, even to allow them into her flat in Amsterdam. While I was concerned that this woman was not getting the treatment she so desperately needed to merely exist in the world, the story is incredibly compelling. The writing combined with Sandra's performance creates two distinct characters, seen at multiple ages. This staged reading also included lighting, sound, set, props, and some movement around the stage, making it easier to see what a fully staged production would look like.

A PLAY BY BARB AND CARL
June 20th - 23rd, 2019
WRITTEN BY CARLYLE AND BARB BROWN
In March 2017, playwright Carlyle Brown's wife and dramaturg Barbara Joyce Rose-Brown had a stroke leaving her with right side weakness and unable to speak.  A dramaturg had lost her access to language.  A playwright had lost his dramaturg.  As a way of dealing with their situation they decided to write a play. This is that play.

BEFORE YOU WERE ALIVE
June 27th - 30th, 2019
WRITTEN AND PERFORMED BY BETH GILLELAND
DIRECTED BY MICHAEL ROBINS
MUSIC BY DB CARLSON
Some years ago I began mothering a little boy who had lost his mother.  Both of our lives were dramatically altered.  He was hungry for mother love, and I—an up-to-then single artist—inherited a family that both demanded my focus and augmented my life experience in new ways. I began taking notes and recording my unfolding feelings and experiences of being a new, full-time parent riding the wake of a child’s loss. Here are some of those experiences.