"The Lightning Thief: The Percy Jackson Musical" on tour at the Ordway 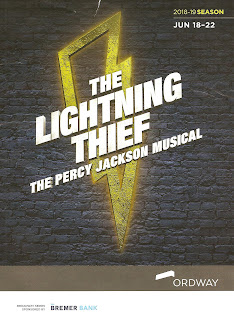 Friends, when I heard that something called The Lightning Thief: The Percy Jackson Musical was coming to the Ordway, I had no idea what that meant. Who's Percy Jackson, is this some bio-musical? I almost didn't see it, but when I read that it was adapted from a series of young adult novels that are a sort of Greek mythology fan fiction, I was intrigued. I saw the show last night with zero expectations (which is often the best way to see a show) and was pleasantly surprised at how delightful this story is. A relatable message for teens (and adults), a catchy clever score, fun theater magic, and a fantastic seven-person cast (many of whom reprise their roles from the original Off-Broadway production) make this a show worth seeing, even if you've never heard the name Percy Jackson.

As I learned last night, Percy Jackson is a kid who feels like he doesn't fit in anywhere, and is expelled from school after school. Not because he's a bad kid, but because his ADHD and dyslexia leave him unfocused and confused. As it turns out, there's a reason he doesn't fit in - his father is Poseidon, god of the sea. He finds himself at "Camp Half-Blood" with other children of a god/dess and a human. There's Luke, son of Hermes the messenger (see also Hadestown); Clarisse, daughter of the god of war Ares; Annabeth, daughter of Athena god of wisdom; and Percy's best friend Grover, who turns out to be a half-goat. At the camp, the kids learn important skills and complain about their godly parents. If you think your parents don't listen to you and never have time to you, imagine if you're parents were in charge of running the universe!

Soon after arriving at camp, Percy is sent on a quest (a high honor for a god kid) to recover Zeus' stolen lightning bolt. Someone stole it to cause a war between the big three gods (Zeus, Hades, and Percy's pop Poseidon), and Percy's task (a la the classic hero cycle) is to stop the war. He and his quest companions Grover and Annabeth travel to Hades (in L.A., natch), where they meet The Ferryman, who as it turns out is a fabulous singing diva. Their encounter with Hades doesn't go as planned, and things aren't quite what they seemed, but as in any good hero story, Percy prevails with the help of his friends.

All of the many roles - human, god, and animal - are played by a seven-person ensemble that often feels larger than it is. Chris McCarrell reprises his Off-Broadway role as Percy and is a fantastic talent. He's got great energy, tons of charisma, and an incredible voice, in a performance that feels so natural and effortless. Another original cast member, Kristin Stokes, is also great as the Hermione to Percy's Harry, a strong female heroine to root for.

Continuing the Harry Potter analogy, Jorrel Javier's Grover is the Ron of the group, and he brings a lot of warmth and humor to the role. The other four actors all play so many different characters I can't keep track. The two other original cast members are Sarah Beth Pfeifer, a powerhouse as the bad girl Clarisse, a scary math teacher, and several charming animals, and James Hayden Rodriguez as Luke (the Judas to Percy's Jesus) et al. Completing the cast are Jalynn Steele as Percy's sweet and supportive mother, a prophecy spewing oracle, and the aforementioned diva ferryman, and Ryan Knowles, almost unrecognizable as he transforms from the wise centaur teacher Chiron, to Medusa, to the surfer dude Poseidon, to "a Paul Lynde* inspired Hades," except that he carries that exceptionally deep voice through all of the characters. The entire ensemble works so well together as they create this unique world.

Delightfully low tech theater magic makes pens change into swords, and monsters appear out of nowhere. The sparse set of metal scaffolding in front of graffitied Greek columns sets the scene while allowing imagination to do the rest. The small but mighty onstage band consists of music director Wiley DeWeese on keyboard plus guitar, bass, and percussion. Choreographer Patrick McCollum (who also choreographed the sublime The Band's Visit, coming to Minneapolis this December) has created some fun, energetic movement for the cast.

At the end of the show, Percy and his friends decide that instead of hiding in the safety of the camp, they're going to venture out into the real world, where the real monsters are ("The gods will think we're impudent." "Oh, we are impudent!") This calls to mind all of the smart, determined young people who I believe are going to save us from ourselves. A main message of the show is "what makes you different is what makes you strong," celebrating the misfit in us all.

These kids lament that their parents don't listen to them, which every teenager can relate to. But if you're a parent and your kid is telling you they want to see The Lightning Thief: The Percy Jackson Musical, listen to them. There were a ton of kids in the audience last night, and it's great to see young people enjoying live theater.

The Lightning Thief: The Percy Jackson Musical is only in St. Paul through this Saturday, so don't delay!


*Kids, Paul Lynde was a comedian and actor who played Uncle Arthur on Bewitched and was a staple on game show shows in the '70s. Look him up.