"A Raisin in the Sun" at Lyric Arts 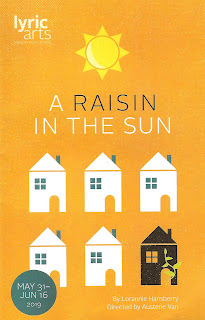 The last time I saw the American theater classic A Raisin in the Sun was in November 2016, at Park Square Theatre. Re-reading that post today, I was struck by this: "I'm writing this on the afternoon of election day, and no matter what tomorrow brings or who our president is, the work for social justice and equality continues. Theater such as this furthers that work by taking a deep look at our shared history and how it reflects in the present." Well, it's two and a half years later, and we now know what that tomorrow brought, and the tomorrows after that. The never-ending work for social justice and equality feels even more urgent now, and this play about "dreams deferred" for African Americans is as relevant as ever. Lyric Arts has brought this classic to their suburban Anoka stage and delivered a powerful production. I have previously called Lyric out for their lack of diversity on stage, which is something I know they've been working on. I commend them for bringing this play with a mostly African American cast to their stage and their audience, and for hiring a black female director (veteran #TCTheater artist Austene Van) to tell this story written by the first black female Broadway playwright, proving that this 60-year old story is one that still needs to be heard, even (or especially) in the suburbs.

The entire play takes place in the living room of the Younger family in a shabby but well cared for apartment on Chicago's South Side. Matriarch Lena lives there with her two adult children, after raising them there with her deceased husband Walter. The family includes brother Walter Lee, his wife Ruth and their son Travis, and sister Beneatha. They all have dreams, and the arrival of an insurance check worth $10,000 (almost $90,000 in today's money) has them all wanting to make their dreams come true, if they can only agree on whose dream to pursue. Lena wants her family to have a house they can call their own, with a garden where she can grow a plant or two, and a yard where Travis can play. Walter Lee wants to buy a liquor store so he can be his own boss and support his family. Beneatha wants to be a doctor (pretty impressive dreams for a young black woman in the '50s), is discovering her African identity, and is torn between two suitors. This is a family that loves each other deeply; they all want what's best for the family, but can't agree on what that is. Further complications arise, including an unexpected pregnancy, a betrayal by a business partner, and most shockingly, the arrival of a white man named Mr. Lindner from the "neighborhood improvement society" who wants to buy them out to prevent a black family from moving into the all-white neighborhood. How each family member reacts to these complications determines what kind of person they want to be and the future they will have.*

Each one of these characters feels very real and very human, thanks to Lorraine Hansberry's writing and the performances of this terrific cast, most of whom are new to the Lyric Arts stage. Charla Marie Bailey reigns supreme as Mama Lena. Dana Lee Thompson brings a depth of humanity to Ruth, the hardest working member of the family. Camrin King is a delightfully spirited Beneatha, 10-year old Leonard Searcy Jr. is adorable as Travis, and Don Maloney's Mr. Lindner is maliciously polite. In the performance I attended, understudy John A. W. Stephens filled in for Leonard Searcy Sr. as Beneatha's Nigerian suitor Asagai, and did a wonderful job. Last but not least, Doc Woods really owns the role of Walter Lee, alternately empathetic and infuriating, and deliveres some of the most powerful monologues of the play with passion and desperation. The entire cast works together really well as a family under director Austene Van, who brings out all of the humor, heart, and gravity of the piece. It really isn't hard to draw parallels with today's world.

The Younger apartment is beautifully rendered with great detail by scenic designer Peter Lerohl, from the working stove to the doilies on the couch to the neighboring brownstones seen above the interior of the apartment. Costume designer Samantha Fromm Haddow has clad the cast in period clothing befitting each character. The entire design really feels like stepping into 1959 Chicago.

A Raisin in the Sun should be required viewing for all Americans, so if you haven't seen it, get yourself to Anoka (it's really not that long of a drive). And even if you have seen it, it's never a bad time to revisit this classic whose themes of generational conflict, racial discrimination, and a family dreaming of a better life for themselves still resonate. Continuing through June 16.

*Plot summary borrowed from what I wrote about Park Square's production.