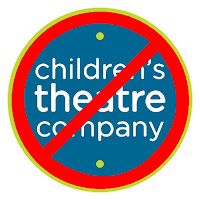 I'm sure many of you have heard about the movement to boycott Children's Theatre Company (CTC), which was started by #TCTheater artist Laura Stearns Adams, one of the many survivors of sexual abuse at CTC in the '80s. You can read more about her case against CTC and the reasons for the boycott in this MPR story, and you can read her original post on my friend and fellow blogger Gina Musto's blog here. I shared this post on Facebook, and I also shared CTC's video response (which you can watch here) on Twitter, stating "This feels like a good first step in the long journey towards healing, justice, and restitution. I look forward to seeing how @ChildrensTheatr continues to work with the survivors and survivor organizations."

While I've supported the survivors from the beginning, I haven't yet gone so far as to say that I, personally, am boycotting CTC. First of all, since it's the end of their season and I have no plans at CTC for the next several months, they would be words without action. You can't boycott something you're not participating in anyway. But I realize that those words do mean something, even if just words at this point. I haven't said them because I struggle with how to stand up to the CTC lawyers and management who have been making these decisions, while still supporting the artists who work at CTC. I've had the privilege of meeting many of these artists; I've been in the scene shop and the rehearsal room, I've seen the love and work that they put into making quality, meaningful, inspiring theater for children. I have personally been inspired and moved by theater at CTC, and seen the delight on children's faces as they experience theater for the first time. It's extremely difficult to reconcile the good work that is being done at CTC with the atrocities committed in the early days of the theater, and the insensitive way the current administration has handled the recent lawsuits. Honestly I was hoping that CTC would step up and do the right thing before their new season starts in the fall, so that I wouldn't have to make a decision to boycott. But the more I read and think about the issue, the more I've come to believe that the bad outweighs the good at this moment.

I am finally ready to say that I am boycotting Children's Theatre Company (meaning I will not attend their shows or promote them in any way) until they can make good on the promises in their video and resolve these issues to the satisfaction of the survivors. I hope it's soon, I hope CTC meets with survivors tomorrow to make a clear action plan to at least begin to right the wrongs that have been done, and we can all go back to making and experiencing and talking about great theater. But until they do, you will not hear anything more about CTC's shows from this blogger. If and when Laura Stearns Adams and the other survivors determine that the current CTC administration has done right by them and the boycott can end, I will happily go back to covering the great work that CTC does, as well as sharing information about the hopefully soon to be proposed initiatives to help survivors of the abuse that occurred at the hands of CTC employees in the 1980s.

Here are a few other articles (there are tons, and more every day, so I encourage you to do your own research as well):


Update: the boycott was lifted in November when CTC settled all of the sexual abuse cases and made plans for a survivors fund and other reparations, more details can be found here.