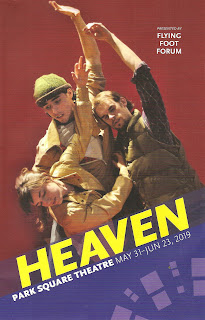 A dance musical about the Bosnian War? Why not! It may sound like a crazy idea, but in the hands of creators Joe Chvala (Artistic Director of theatrical dance company Flying Foot Forum) and Chan Poling (renowned local musician and composer of musicals such as History Theatre's smash hit Glensheen), it's a thing of beauty. The Bosnian War in the mid 1990s was a devastating event that resulted in the deaths of 100,000 people, many the result of ethnic cleansing. The devastation and horror, along with the beauty and culture of the people, is expressed through story, music, and movement in an incredibly moving way. I saw Heaven at the Guthrie's studio theater eight years ago and loved it, and I'm thrilled that Park Square Theatre has brought it back so that this story can live on and be shared with a wider audience. Combined with the excellent and sobering exhibit Genocide and Justice: From Nuremberg to the International Criminal Court by World Without Genocide, it makes for a really powerful evening that goes beyond theater. Even though the show is over two and a half hours long, I didn't want it to end.

The show begins before the show begins. Be sure to get to your seat 15-20 minutes early to enjoy the pre-show entertainment of traditional Eastern European music and dance as the cast mingles onstage at Kafé Heaven. You'll know the show is officially beginning when the proprietor (played by director/choreographer Joe Chvala) welcomes the audience to Kafé Heaven. Similar to the prologue of West Side Story, the opening dance number sets the scene, as dancing turns to fighting and back to dancing again. Throughout the story, music and dance are woven seamlessly into the dialogue in such an organic way that there are few applause breaks (which this theater-goer enjoys), just continuous storytelling.

The protagonist of the story is Peter Adamson, an American photographer. Peter is in Bosnia to serve as a witness to the atrocities of war, hoping he can somehow change the world. After three years he's become jaded and convinced that no one can do anything to help. A few days before shipping out, he meets a man named Faruk and agrees to go on one last mission to help him find his wife. The experiences he has on the journey and the people he meets prove to be life-changing, in more ways than one. He gets the one shot that lands him the front page of the New York Times, that might possibly bring awareness and an end to the senseless killing. But he's conflicted about his success because he knows that there's much more behind the photograph. In the end, he finds he can't leave this place and its people behind.*

Much of the cast and ensemble return from the 2011 production, including many Flying Foot Forum company members and Eric Webster as the war-weary Faruk, so desperate to reunite with his wife that he will do anything. New to the production are Riley McNutt as Peter, so believable and sympathetic; promising #TCTheater newcomer Jessica Staples as Peter's love interest; and Lara Trujillo as Faruk's wife. There are over two dozen people on stage (and two children), including cast, ensemble, and band, playing multiple roles and speaking and singing in various accents and languages, and they really create a feeling of a fully populated complex world.

Composer Chan Poling's score (also created by Joe Chvala, Victor Zupanc, and Natalie Nowytski) is a wonderful blend of Eastern European sound with more traditional musical theater songs. Music director/band leader Jake Endres and lead vocalist Natalie Nowytski, who specializes in this style of music, return from the 2011 production and lead this fantastic cast and band in creating a beautiful and moving soundscape for the story. Joe Chvala's trademark percussive body-slapping choreography is thrilling to watch, and perfectly matches the tone of the story, whether it's the terrors of war or the celebration of the people.

The design relies heavily on video projections, which are well used, especially in showing us Peter's photographs as he takes them, replicating what's happening on stage with a single image. The stage has a big open space for dancing, with the cafe on one side and the shell of a building on the other. The cast is dressed in a mix of '90s clothing and more traditional Eastern European costumes, all of which allow the dancers to move freely and beautifully. (Set design by Robin McIntyre, video design by Steve Campbell, costume design by Cindy Forsgren.)

Heaven is one of my favorite local music-theater-dance creations of the last decade, and I'm so happy it's back. It's really about finding connection and joy, even amidst the horrors of war. As I wrote in 2011: "Original musical theater that uses music and movement to tell an interesting, relevant, meaningful, entertaining story, and to help us make sense of the world we live in. That's what musical theater can, and should, do. And when that happens, there's nothing better."

Heaven continues through June 23 at Park Square Theatre in downtown St. Paul. Be sure to get there early to take in the exhibit in the lobby and pre-show entertainment on stage, and consider partaking in the post-show discussions and related programming (click here for all the details).

*Plot summary borrowed from what I wrote about the 2011 production.