"Guys and Dolls" at the Guthrie Theater 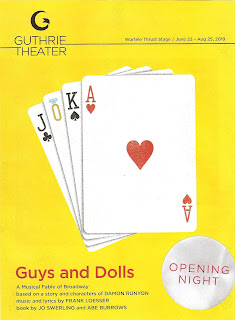 So here's the thing, my #TCTheater friends. The Guthrie Theater's production of the 1950 classic musical Guys and Dolls is spectacular. The cast is brilliantly talented, the dance numbers are phenomenal, the music is familiar, fun, and lively, and every element of design is spot-on gorgeous. But even all of that wonderfulness can't overcome the fact that Guys and Dolls is a dated, misogynist story that we don't need to tell anymore. Calling women "dolls," and all of the gender stereotypes wrapped up in that, is just not cute in 2019. I've seen the show several times in the past, and I've loved it in the past, but each time I see it I love it a little less. The world is changing, I'm changing, but Guys and Dolls remains rooted in gender stereotypes from the title to the lyrics, dialogue, and story. To their credit, the Guthrie has made a number of changes that make the show a little more palatable to a modern audience, but there's only so much they can do. Ever since they announced their season last year, I couldn't understand why they would choose to do this show now, except that it's a crowd-pleaser that will sell lots of tickets. The good news is that their other summer show is a world premiere of a new play that the Guthrie commissioned from Lynn Nottage, a two-time Pulitzer Prize-winning African American female playwright. If doing dated old musicals that have been done a million times is the price we have to pay to support new work from too often unheard voices, well, as Stephen Sondheim wrote in the Pulitzer Prize winning musical Sunday in the Park with George (seen at the Guthrie two summers ago in a stunning production), "that is the state of the art, my friends." And don't get me wrong, it is a super fun show and audiences are going to have a great time. I had a great time. But I'm also disappointed that we keep telling these old stories instead of discovering new ones.

If you don't know the show, the plot is basically summed up by the dated stereotype that men don't want to get married and women have to trick them into it (and then change them). More specifically, Guys and Dolls centers around the underground gambling business in NYC and a mission trying to save the sinners. Nathan Detroit runs the big craps game in town and is always looking for a place to hold it, while trying to hide it from Adelaide, Hot Box dancer and his fiance of 14 years. To get the money to secure a location for the game, Nathan bets big-time gambler Sky Masterson that he cannot convince pious mission worker Sarah to go to Havana with him. Sky wins the bet, but it's not quite that simple. To win Sarah's heart, he bets against the guys' souls to get them to come to a meeting and save the mission. And everyone lives happily ever after.*

Director Kent Gash has made several changes to how I've seen the show done in the past that help to soften the potentially offensive content. One of the most problematic scenes in the show is in Havana. Sarah wants a milkshake so Sky orders them a drink with alcohol in it, which she drinks without realizing it's alcohol; basically, he drugs her without her consent. Not cool. In this version, without changing a word, it is quite clear that Sarah knows there's alcohol in the drink (and Sky knows she knows it) and chooses to drink it anyway. This completely flips the narrative from a silly guileless woman being unwittingly drugged by a man, to a smart savvy woman who chooses to have a drink, dance, and flirt with a handsome man while on vacation. Which is a thing women can choose to do, even those with high moral standards.

Another positive change is the performance of the song "Take Back Your Mink," which is basically about a man who gives a woman gifts in exchange for sex, and when it comes time to collect, she protests and gives him back the mink, the dress, the pearls, etc., resulting in a strip-tease. But in this version, there are notably no men on stage. The women are not performing for the men's pleasure, they're making a statement that they don't need all these fancy gifts or the men who gifted them. It becomes an empowering female friendship sort of song, again flipping the narrative from the original.

Lastly, there are a couple of casting choices that fly in the face of the gender stereotypes. Ensemble member Mark Andrew Garner plays both a guy AND a doll - he's a gambler and a hot box dancer (a fact I didn't realize until curtain call, so convincing is he in both roles). Additionally, the role of tough Chicago gambler Big Jule is played the fabulous local actor Karen Wiese-Thompson in her Guthrie debut, a role typically played by a man, and here played as a man, but with a twist. Both of these casting choices help to blur the line of the show's strict gender stereotypes.

Now about that brilliantly talented (and beautifully diverse) cast. As is the norm for the Guthrie's summer musicals of late, the four leads are not local actors, but over two-thirds of the ensemble are, and it's great fun to see lots of familiar and beloved faces from this and other stages around town. Each and every one of them bring such life and energy to their roles. As Adelaide, Kirsten Wyatt gives a genius performance and fairly steals the show. She even makes one of the most infuriating songs ("Adelaide's Lament," which is about how single women sit around pining for a ring and make themselves sick) almost charming, and her Adelaide is more than just a stereotypical doll. Similarly, Olivia Hernandez is a smart and strong Sarah, more than just the object of a bet. I just wish these two women had more scenes together, and got to sing about more than their plan to "marry a man today and change his ways tomorrow" (a sentiment that is likely largely responsible for the high divorce rate). As their fellas, Rodney Gardiner (recently seen jumping in a pool on the Guthrie stage in Metamorphoses) is a charming rogue of a Nathan Detroit, and Jeremiah James (who played the prince in the Ordway's Cinderella many moons ago) is a dreamboat of a Sky Masterson. Both couples have wonderful and believable chemistry and sing beautifully together.

NYC-based music director J. Oconer Navarro leads the terrific ten-piece orchestra who are seated on an elevated platform behind a scrim at the back of a stage, often visible, which is a thrill. The music is truly the best thing about this piece and it sounds fantastic, fresh, and fun. Choreographer Dell Howlett has created some thrilling moments too, beginning with the opening number which wordlessly introduces the colorful world of NYC sinners and saints (that's #TCTheater's own Caroline Innerbichler creating a Marilyn Monroe moment, before leaving town to tour the country as Anna in Frozen). Other highlights include the sultry Havana scene, an exciting body-slapping percussive dance moment among the gangsters, and what is always the best number of the show, the rousing and rollicking "Sit Down, You're Rockin' the Boat," led by a winning Justin Keyes as Nicely-Nicely and #TCTheater favorite Regina Marie Williams as General Cartwright. This number brought the house down and prompted a rare mid-show standing ovation.

The Guthrie's thrust stage is dominated by a looming two-dimensional skyline of NYC, with rolling set pieces representing a newsstand, telephone booth, and the framework of the Save-A-Soul Mission. Lighting and costume design fill the world with color; the costumes are, as per usual at the Guthrie, luscious and impeccable. (Scenic design by Jason Sherwood, lighting design by Dawn Chiang, and costume design by Kara Harmon.)

There are a lot of things to love about this production of Guys and Dolls, it's nearly flawless. In fact, the only flaw is the choice to produce it in the first place. I expect more from one of the country's leading regional theaters than to produce a dated piece that every high school and community theater has done, even if it is the best possible production of that piece. I look forward to next summer's musical Cabaret, which, while still a commonly produced crowd-pleaser, at least has substance and relevance to today - the terrifying rise of Nazism.

At this year's Tony Awards, Hadestown became the first best musical winner written and directed by women. Ever. In 2019 - way overdue. It's time to create some new classics written by some new voices, and I have no doubt that Hadestown will become a classic - it's based on Greek mythology, what's more classic than that?! My greatest wish for the Guthrie summer musical in the future is a world premiere of a new original musical that will become a new classic.

If you're looking for a new original musical that's never been done before, I recommend Jefferson Township Sparkling Junior Talent Pageant at Park Square Theatre. For a rarely done all-female musical, check out Theatre Elision's Ruthless! in their brand new performance space in Crystal. And for more on the way women are portrayed in musical theater, I refer you to my favorite Minnesota Fringe Festival show from last year - Not Fair, My Lady!


*Plot summary borrowed from what I've written about the show in the past.