"Metamorphoses" at the Guthrie Theater 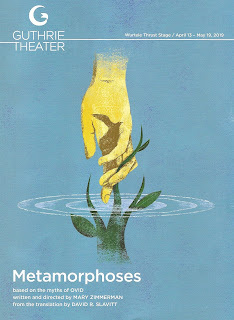 "Myths are public dreams; dreams are private myths." The Guthrie's production of Metamorphoses, from which this quote comes, feels like a dream and a myth, gorgeously come to life on stage. I knew nothing about this play going into it, and was absolutely enthralled by it. Some of the myths relayed in the play were familiar to me, some entirely new. The play is only 90 minutes long, so only 10-15 minutes is spent on each myth. But the telling is so exquisite that each one feels like a full, rich, complete story. Playwright Mary Zimmerman directs the play she wrote 20+ years ago. When the same person writes and directs, it creates such a singular vision, a clear and cohesive storytelling, and that's definitely the case here. You don't need to know anything about mythology to see this play, and don't let that word scare you. This is not a dry history lesson from long ago, it's a fluid, captivating, beautiful retelling of these archetypal stories that still resonate.

The play Metamorphoses is an adaptation of the epic poem of the same name, a collection myths by the ancient Roman poet Ovid (don't worry, I didn't really know who or what that was before seeing the show either). A cast of ten actors play multiple roles as they tell these nine or ten different little stories. Little in length, but each one epic in scope. Familiar stories include King Midas - everything he touches turns to gold, including, devastatingly, his beloved daughter. We also hear another familiar story that never goes old, that of Orpheus, who followed his love Eurydice into the Underworld (see also Hadestown). Then there are the stories that I've never heard - the disturbing tale of a young woman in love with her father; a beautiful love story of a happy couple torn apart by the sea, then reunited as birds; a story of gods come to earth and taken in by a poor elderly couple as strangers.

The play is ingeniously constructed, with one story flowing to the next, narration being passed off from one character (god or human) to another. Each is succinct, and the storytelling is different for each (one is charmingly told by a man to his therapist). It's like a collection of short plays, but also works as a cohesive commentary on the nature of being human and the ever changing lives we live.

The play is staged around a pool, an actual pool that fills the Guthrie's thrust stage, from shallow to maybe 3 feet deep. Some characters walk delicately in it, some dive headfirst into it, some splash themselves with the water (and presumably the first row or two of the audience). A few weeks ago I marveled at Freshwater Theatre's production of The Drowning Girls and the actors who worked wet and in water. This is that times ten. The cast plunges right into the water as if it's nothing (I wonder what the temperature is?). It's quite a remarkable thing to see, and a remarkable thing to think about all of the work that went into building the pool so that it's safe and comfortable for the actors, as well as beautiful and effective in the storytelling. There's also a grand over-sized doorway, and an image of a cloud-filled sky that changes color. The actors are clothed in beautiful jewel-toned period costumes, made of some miraculous fabric that allows them to walk and move in them when absolutely drenched. (Scenic design by Daniel Ostling, costume design by Mara Blumenfeld, lighting design by T.J. Gerckens.)

This is a co-production with Berkeley Repertory Theatre, and the wonderful cast has transferred from that production. But there are some familiar faces among them: #TCTheater artist Steven Epp of The Moving Company; Felicity Jones Latta, twin sister of #TCTheater actor Charity Jones, currently performing across the hall in Cyrano de Bergerac; and the understudies, one of whom I was fortunate to see the night I attended - the tall and terrific Tyson Forbes, fitting right in as if he were always a member of the cast. All of the actors do a fantastic job of bringing these ancient tales to life and making them feel so now, making these archetypal characters seem real, human, funny, tragic.

The gorgeous, moving, epic (yet only 90 minutes long) Metamorphoses continues on the Guthrie thrust stage through May 19.