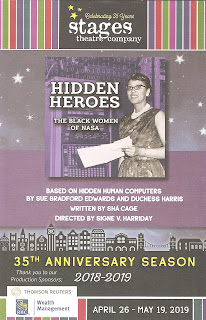 Are you (or your children) a fan of superhero origin stories? If so, you (and they) should go see Hidden Heroes: The Black Women of NASA at Stages Theatre in Hopkins. It's the origin story of heroes named Katherine Johnson, Mary Jackson, Miriam Mann, and Annie Easley - black women scientists and mathematicians who played a vital role in the space race. Most of us learned about them through the 2016 film Hidden Figures, which was based on the book of the same name that came out the same year. Now multi-talented #TCTheater artist Shá Cage has adapted the book into a play for young people, that imagines what these remarkable women were like as children. She's taken a bit of artistic license (I doubt all four went to the same school), but shares the truth of what it was like to be a black girl growing up in the mid 20th Century, the limitations placed on them that they persevered through to become heroes. It's a very special thing to see a stage full of women and girls of color telling this story, inspiring us not only with the history of these smart, brave, pioneering black women, but also with their own artistic talent. Director Signe V. Harriday notes in the program: "May this play spark in you the feeling of joy and the power of dreaming." Mission accomplished.

The story is cleverly constructed by playwright Shá Cage. We never get to NASA, rather we see the future scientists as young girls, studying, playing, and dreaming. Their individual stories of family and school are woven together with African American history in a way that feels epic, despite the short 70-minute runtime. It brought tears to my eyes to witness these young women's dreams, celebrating the successes, acknowledging but not dwelling on the struggles. Our main character is Mary (an appealing Lilie Rankin, making her debut at Stages), who lives with her mother (Lynnea Doublette) and grandmother (Jamela Pettiford), while her father is away working in Alabama - a constant source of worry for Mary. Mary and her friends come from different backgrounds but have a love of learning in common, making up math songs and games, and watching and naming the stars. The girls are in the running for a scholarship to a special school, but they all support each other rather than compete. Well, for the most part, they are teenagers after all.

Director Signe V. Harriday leads this talented young cast (including Johannah Easley with oodles of attitude as the girls' teacher) through this story that includes movement, poetry, and music. The use of the song "Follow the Drinking Gourd" is appropriate as it recalls escaping slaves, and points to the girls' love of the stars. Stages Theatre's smaller performance space is set up as an alley stage - audience along both sides of a corridor, a wonderfully intimate way to tell the story (a space so intimate I don't think the body mics are necessary). A rotating raised circle is in the center (charmingly turned by the girls), with Mary's home on one end and the school on the other. The girls are dressed in cute school girl dresses, and one shockingly in trousers! (Set design by Jim Hibbeler, costume design by Samantha Fromm Haddow.)

Stages currently has two shows running on the STEAM theme (encouraging children to learn about science-technology-engineering-arts-math), the other being The Most Magnificent Thing. Both are great choices for young people, but Hidden Heroes feels like such an important story to tell, for young black girls to see themselves on stage, to see the great things they can and will accomplish in their lives. And for all kids, the play is an accessible and entertaining way in to this inspirational story and the history that it represents. I was a girl who loved math, and no one told me I couldn't do it, or tried to stop me from pursuing education and a career in math and science. That's the way it should be for all girls (and boys) regardless of race, class, or nationality.

Hidden Heroes continues through May 19 at Stages Theatre Company in Hopkins.