"Victor/Victoria" by Artistry at Bloomington Center for the Arts 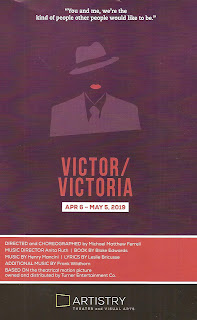 Twenty-four years ago, a new musical premiered in Minneapolis before moving to Broadway. A new musical starring Julie Andrews, created for her by her husband Blake Edwards, based on the 1982 movie also created for her. Yet inexplicably Victor/Victoria is only now receiving its regional premiere. Theaters have a tendency to do the tried and true musicals that we all know and love, but there are so many rarely produced gems out there (see also this list of musicals written by women). Artistry is bringing us one such musical in Victor/Victoria, and even more in their 2019-2020 season (which includes the rarely done musicals A New Brain and Mame, as well as the regional premiere of the 2014 musical The Bridges of Madison County with music by Jason Robert Brown, one of the most gorgeous scores I've ever heard). And even better - Victor/Victoria happens to be very timely and relevant with its themes of gender fluidity and being free to be who you are and love who you want. The team at Artistry has delivered a gorgeous production of this big old-fashioned musical full of heart and humor.

Filmmaker Blake Edwards created the movie as a vehicle for his wife, Julie Andrews (wouldn't you do the same?), based on a 1933 German film. Set in 1930s Paris (think Cabaret without the ominous cloud of Hitler), the title character is a female opera singer down on her luck. She meets fellow performer Toddy, who convinces her she would have more luck if she pretended to be a man who performed as a female impersonator. Victoria agrees, and enjoys the privileges that come with living as a man (totally relatable to any woman living today or at any time in history). Victor becomes the toast of the town; the only problem is that Victoria has fallen in love with an American gangster businessman named King Marchan who, much to his surprise, has also fallen in love with Victor. Their star-crossed romance culminates when he kisses her, saying, "I don't care if you're a man." Because love is love. But this is a comedy and a musical, so there's more to it, as King is still uncomfortable with people thinking he's in love with a man, and Victoria is unwilling to give up her successful life as a man. But as they say in the song, Victoria is a victor, and the show ends with a beautiful song and message about claiming your own identity and your love.

Who do you get to step into Julie Andrews' shoes? No one better to do so in #TCTheater than Ann Michels, making her Artistry debut after many fantastic performances at the Guthrie, the Ordway, and the Chanhassen, to name a few. Her voice is gorgeous, not just hitting those high notes, but also bringing so much emotion to the words spoken and sung. Not to mention all of the dancing, and totally owning all of the fabulous garments she/he wears that span the gender spectrum. As her BFF Toddy, Rich Hamson is a delight, in one of his rare forays outside of his role as the Chanhassen's resident costume designer (the last time was four years ago in Artistry's La Cage aux Folles). He's so warm and funny and very human, as Toddy too longs to break out of gender norms and be who he is. Shad Olsen (who comes to #TCTheater from NYC via Duluth) is a charming King Marchen, and the Victoria/King duet "Almost a Love Song" is so lovely I wish they had more of them. The strong supporting cast also includes Emily Scinto, stealing scenes as the dumb smart blonde Norma, the always fabulous Brandon A. Jackson as a powerful agent, and Leslie Vincent with a humorous turn as a club manager (a role usually played by a man).

As director, Michael Matthew Ferrell has imbued the show with such life and heart. As choreographer, he has created one showstopping number after another. Really fun, modern, sexy, gender-bending choreography flawlessly executed by the ensemble, in particular the eight featured dancers who are getting the workout of their lives every night with this show. Likewise Ed Gleeman's costumes are gorgeous, colorful, sexy, and gender-bending. It all unfolds against the backdrop of Jeff Brown's two-story art deco set, with Artistry's resident music director Anita Ruth leading the eight-person onstage orchestra, helping to create that cabaret feel. Henry Mancini's jazzy Broadway score's most well known song is "Le Jazz Hot," a highlight of the show.

Victor/Victoria continues through May 5 - a rarely done musical featuring a fantastic cast and design, with a much needed message about love, identity, and community.