"Velvet Swing" by the Umbrella Collective at Bryant Lake Bowl 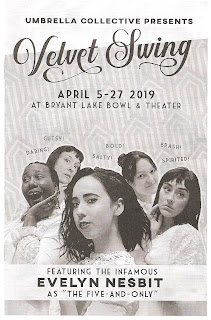 So go the lyrics of the song "Crime of the Century" in the musical Ragtime, based on the E.L. Doctorow novel about life in early 20th Century America. But of course, there's more to the story of Evelyn Nesbit than that. Who lives, who dies, who tells your story? In the new play Velvet Swing by the Umbrella Collective, Evelyn tells her own story, as brought to life by five actors. This 100+ year old story rings eerily true today - a young woman taken advantage of by older men she trusted and who helped her in her career, a fascination with celebrity, a true crime story that was the talk of the town. Umbrella Collective sheds a new and modern light on this all too familiar story.

Velvet Swing is performed in a Vaudevillian, melodramatic style (content dictates form). The show begins with a pianist (Michelle Hernick, playing lovely background music throughout the show) introducing the main act - Evelyn Nesbit. The twist is that five actors play her, so that we get to see all of her sides personified. The excellent ensemble (Antonia Perez, Jessie Scarborough-Ghent, Meredith Kind, Mickaylee Shaughnessy, and Natavia Lewis) also step into all of the other roles in Evelyn's story, sometimes reluctantly. We learn about Evelyn's early life and how she became a teenage model posing for all the most famous artists in New York City, that led her to the stage, that led her to famous architect Stanford White, a man 30 years her senior who was obsessed with her. She eventually married businessman Harry K. Thaw, who murdered Stanford White, and the rest is history. But those are just the facts. What Velvet Swing does so beautifully is show us Evelyn's experience and feelings throughout these infamous events, as she's used by various men in her life. Evelyn lived to the ripe old age of 82, and the show gives us several different options for how her story ends - a happy and contented life, always tortured by the past, or somewhere in between.

This is a devised piece, meaning that it was created by the ensemble. Directors Alana Horton and Megan Clark have created a consistent and cohesive story from this process, in which all cast members take on an equal part of the storytelling, the narrative clear as it's passed from one to another. They're all consistent in tone, yet each woman brings us a little different side of Evelyn. Dressed in white with kewpie doll make-up, sometimes they're all Evelyn at once, or one of them is while the others play different characters with the addition of a piece of wardrobe (costume and props designed by Josie Everett). The whole package is very thoughtful, staying true to the story and period, but yet drawing obvious parallels to the world we live in.

I certainly know more about Evelyn Nesbit than I did before, and see her as more than just the glamorous "girl on the swing." Her story is not that different from other stories we've heard the last year or two in the #metoo movement, proving that the more things change, the more they stay the same. Thanks to Umbrella Collective for bringing us this story of a fascinating historical woman, told by women.

Velvet Swing continues through April 27 at Bryant Lake Bowl. The 75-minute show begins at 7, with drink and dinner service available in the theater starting at 6 (sometimes accompanied by a discussion with the creators - click here for more info).