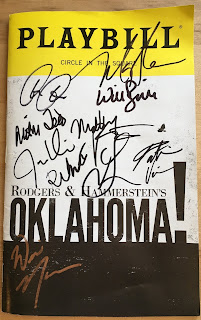 Location: Circle in the Square

Written By: Rodgers and Hammerstein

Summary: Director Daniel Fish brings urgent new life to this American musical theater classic for a complex look at life on the frontier then and now.

Highlights: Genius. Sheer genius. If we're going to revive 75 year old musicals instead of writing new ones, THIS is the way it should be done. Daniel Fish is a true visionary; in a way that reminds me of #TCTheater's Ten Thousand Things, he has taken a piece that we know so well that it can often feel tired and boring, stripped away all of the familiar production elements, and built something entirely new from the original source material (the book and score remain virtually unchanged). I would expect to see something like this in some edgy theater downtown or regionally, not on Broadway, which is why I'm thrilled it finally made it here after several years of development and early productions. It officially opens today for a limited six-month run, and it's going to be huge, so if you're planning a trip to NYC get your tickets now so as not to miss this genius reinvention of a classic.

I don't even know where to begin; words cannot describe this experience that is unlike any I've had on Broadway. Placing this in an intimate in-the-round space is imperative to the experience, which is why I think this cannot tour unchanged. The house lights are up for most of the show, with onstage seating at long tables, most of the 12-person cast (tiny for a show that usually has 20-30 cast members) seated on stage for most of the performance. It feels like we're all at this social together, they even serve chili and cornbread onstage at intermission! This is our America, like it or not. There is violence and ugliness in Oklahoma! that is often overlooked in cheery colorful productions. Not to say this production isn't fun, because it is. There is also much humor and romance, and the beloved score played by a seven-piece onstage Country-Western band has a wonderful old-timey Americana feel (new orchestrations by Daniel Kluger).

The talented, young, diverse, gorgeous cast is dressed in modern Western chic clothes (designed by Terese Wadden), their cowboy boots clumping satisfyingly on the wooden floor. Guitar-playing Damon Daunno has the swagger of Elvis as Curly, exhibiting fantastic chemistry with Rebecca Naomi Jones' strong and independent Laurie. Mary Testa is a tough but motherly Aunt Eller, James Davis is an adorable Will Parker, Ali Stroker (who became the first actor in a wheelchair to appear on Broadway in Deaf West's stunning Spring Awakening) is a scene stealer as Ado Annie, Will Brill's Ali Hakim is a charming rogue, and Patrick Vaill is sensitive, misunderstood, but still threatening Jud Fry.

I don't usually like a dream ballet, but dancer Gabrielle Hamilton's performance of John Heginbotham's choreography is a modern masterpiece, so organic and emotional that it feels like she's expressing with movement everything that Laurie is feeling but cannot say. I mentioned that house lights are up most of the show, except when the stage is bathed in a greenish light for a few eerie scenes, or it's pitch black for the two creepiest scenes and the actors speak into handheld mics, creating an uneasy tension. In a few scenes, a video camera records the actors, projected onto the single wall in the in-the-round space, creating a super cool effect for the Curly/Jud confrontation. Everything about this show is out of the box inventive thinking.

Oklahoma! reinvented (or created) the musical theater form when it premiered in 1944, and now this production is reinventing what a revival can and should be. It's no longer enough just to put up the same old show again without thinking about what the world looks like today. This is a grim look at the violence that built America, that still defines America, at the benefits and dangers of a tight-knit community. A dark, sexy, authentic, urgent Oklahoma! that has never been seen before.