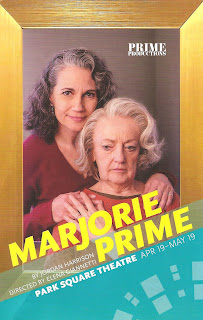 New #TCTheater company Prime Productions "seeks to explore, illuminate and support women over fifty and their stories through the creative voice of performance." Hooray! Their third full production just opened at Park Square Theatre, and it's another high quality thought-provoking play featuring women in their prime. The regional premiere of the new play Marjorie Prime by playwright Jordan Harrison is, like his play Maple and Vine, a little trippy and creepy. But instead of a scary Stepford society, it deals with artificial intelligence and the benefits and possibly scary consequences of technology. But it also deals with very human issues of aging, death, grief, and complicated family relationships.

The Marjorie of the title is an octogenarian woman (born long ago in 1977) suffering from dementia. To help care for her, her daughter Tess and son-in-law Jon have acquired a new bit of technology called a Prime. Which is a sort of computer hologram to talk to her and keep her company that knows everything. Or rather, it knows and remembers everything you tell it. And it can take on the form you choose, so Marjorie's Prime is a young version of her deceased husband Walter. Tess and Jon tell the Prime about Marjorie's life, but leave out painful memories like the death of a child. Tess has a complicated relationship with her mother, and is skeptical about the Prime impersonating her father. As Marjorie's health declines, Tess grapples with her own aging and mortality, and the future she sees for herself.


The excellent four-person cast brings out the human and robotic sides of the characters (not to give away any spoilers, but Walter is not the only Prime in the play). Candace Barrett Birk is wonderful as the title character, very real and human, funny but then breaking down into tears at sudden moments. Laura Stearns and Andre Shoals as Tess and Jon are a believable couple, both exploring a range of emotions from frustration to happiness to devastation. James Rodriguez is perfectly pleasant but not quite human as he embodies the hologram Walter. They all work together well under director Elena Giannetti, who keeps the pace moving but not hurried in this 80-minute show, and explores all of the complicated sides of the story.

The story is well suited to Park Square's intimate basement thrust stage, which has been transformed into a chic, modern, and slightly cold home. There's an interesting use of music too. Marjorie used to play the violin; Vivaldi's Four Seasons is a recurring theme, and transition music is well-chosen. (Scenic design by Joseph Stanley, sound design by Katie Korpi.)

This play leaves one feeling a little unsettled due to the issues it brings up but never resolves. Are we our memories? Are we just a collection of data? What happens when we lose memories? What happens when those memories, that data, is transferred into something else, does it become us? Can artificial intelligence replace humans? The playwright provides a lot of food for thought, and the cast and team at Prime Productions have brought out all of the complexities of the script, creating something that's both very human and relatable, but also futuristic and a little disturbing.

Marjorie Prime continues through May 19 at Park Square Theatre in downtown St. Paul.