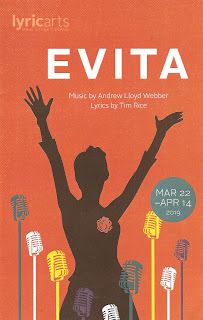 Continuing with their season of showcasing women's stories, Lyric Arts presents the musical Evita, one of the most popular woman's story in music-theater. There hasn't been a local production of it in several years, so the time feels ripe to revisit this story. It's a big show for Lyric Arts to tackle, a sung-through musical with a large cast and complicated score, but they've proven that they're up to the task (this season began with a regional premiere of a new musical, and next season will too). They've enlisted a strong cast, which is notably one of the most diverse casts I've ever seen at the Anoka theater, plus a great design team. The result is a thrilling production of this 1980 multiple Tony-winning classic.

In the entirely sung-through musical, Eva Perón's story is told by a narrator known as Ché. We follow Eva as she escapes a life of poverty in a small village to run away to Buenos Aires with a musician. There she makes a career as a singer and actress, and eventually meets the politician Juan Perón. She hitches her wagon to his star, and after he becomes president, together they become a powerful force and the celebrity couple of the day. Her legacy is somewhat complicated, as politics mixed with charity and wealth. After Eva went on a PR tour through Europe, dubbed "The Rainbow Tour," she fell ill and died at the age of 33, with a lavish and well-attended funeral. The musical brings us full circle, beginning with a scene from her funeral, and then flashing back to tell her life story, ending at the funeral again. Throughout the highs and lows, Ché is there to offer commentary on the issues that her story brings up - fame, politics, celebrity worship, class.*

It's clear from the musical that despite her complicated legacy, Evita was much loved by her people and did good work in her short life. While an epic story, the musical clips along at a good pace and is just over two hours long. Lyric Arts' fantastic production continues through April 14.

*Plot summary borrowed from what I wrote about the touring production a few years ago.