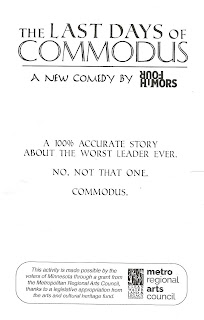 Four Humors Theatre brings their thoughtfully ridiculous interpretation of history and/or literature to the Roman Emperor Commodus, a by all accounts horrible ruler who brought an end to the era known as "Pax Romana" - no more peace and stability for Rome under this egotistical tyrant. Playwright and company member Matt Spring sets the story as a play-within-a-play, which allows for commentary and exposition around the story that's being told, breaking down all the complicated history into a palatable 90-minute story. It's the type of zany fun I've come to expect from Four Humors, perhaps with a bit of social and political commentary if you look past the silliness. The Last Days of Commodus continues through next weekend only at Strike Theatre in Northeast Minneapolis.

The audience enters a door marked "Barbarians Germans Enter Here." We are treated as the audience for the performance of a theater troupe from Rome in what was known as Germania Inferior in the second century. The actors explain to us "barbarians" about the play we're about to see (with lots of jokes about what theater was then, and the role of theater in society then and now). The play is about, natch, the last days of the Emperor Commodus - his rise to power, his love of games, his increasing ego, and the many assassination situations he encountered, until one was finally successful (a quick read of Wikipedia confirms that many of the most ridiculous plot points are actually true - this guy was a piece of work). The actors frequently step out of character to question the playwright and troupe leader Paris, or to explain to the non-Roman audience the traditions of Rome. In this way we get a pretty clear picture of the time period and history while enjoying the humor they pull out of the situation (note: they even get to appropriately reference "the four humors!"). 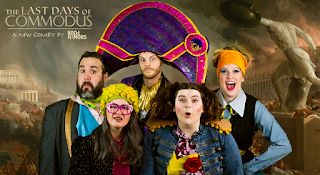 Under director and company member Jason Ballweber, the tone is consistently zany and the pace is fast, as we zip through a few decades of Roman history in 90 minutes. The five-person ensemble (including two Four Humors company members and three newcomers) fully commits to the task and pretty brilliantly transitions from the actor characters to many different characters in the play-within-a-play. Brant Miller is hilarious as usual as the very actorly Paris, as well as several characters, most notably Commodus' workout buddy/assassin. Ryan Lear transforms from a timid actor into the spoiled man-child despot that is Commodus. In addition to providing much of the exposition between scenes, Kathryn Fumie is Commodus' trusty chamberlain(s) and his real housewife. Madeleine Rowe and Yvonne Ingrid Freese play the two German actors in the troupe, and a variety of specific and memorable characters in the play from pompous senators to plotting assassins to soldiers. The ensemble works really well together and has a lot of fun with it.

The look of the show is a comic interpretation of the period. Faux marble columns and blocks, arranged in a multitude of ways, fill the performance space (designed by Derek Lee Miller). The clever and colorful mismatched costumes are mostly modern with hints of the period - gold leaf headbands or those paneled skirts soldiers wore (designed by Mandi Johnson). We're not going for realism here, the more outrageous the better.

As a bonus, I also attended the one-night only remount of Four Humors' hit 2013 Fringe show, Lolita: A Three-Man Show (starring Matt, Brant, and Ryan). That show is probably what first endeared me to them, so it was fun to revisit after five and a half years. It's still a very clever and hilarious exploration of this for some reason beloved movie/book about 40-year-old men in love with a 12-year-old girl, with plenty of fourth wall breaking that allows them to question why we're even telling this story again. The performance was sold out; it appears to have a sort of legendary following. Watch for it to come around again every year or so.

In the meantime, you can see The Last Days of Commodus through April 20 at Strike Theater, your Northeast Minneapolis home for sketch comedy, improv, and storytelling.