"Be More Chill" by Minneapolis Musical Theatre at Illusion Theater 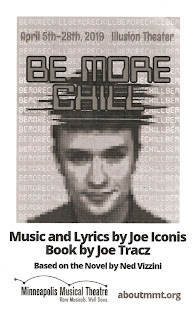 Something strange and exciting is happening at Illusion Theater on the 8th floor of the Hennepin Center for the Arts in downtown Minneapolis. Young people, teenagers even, are going to the theater. And having a great time! As a theater-goer in my '40s, I often find myself the youngest person in the room (especially at a Sunday matinee). Theater audiences skew older, whether for financial reasons, or because of the theater that's being offered, or because young people simply don't think theater is cool. But Minneapolis Musical Theatre seems to have cracked that audience with their latest show Be More Chill, which just completed the 3rd of its four-week run. It's set in a modern day high school, with characters that feel real, even if the situation is fantastical. The good news is even those of us many years removed from our HS days will be delighted by this energetic, exciting, entrancing new musical. Just three more shows remain!

This is not a particularly original story. We've heard it before - a nerd wants to become popular and by some means accomplishes it, leaving their nerd friends behind, only to realize that being popular isn't all it's cut out to be, finally learning to appreciate the life and friends they had before, with a newfound confidence. In Be More Chill, that person is Jeremy, and the means to popularity is a computer the size of a pill (called a SQUIP) which, when swallowed, provides a sort of assistant in your head who analyzes all data and situations and tells you the proper way to act (I don't know about you, but I could use one of those!). It works for Jeremy, and he's soon befriending the cool kids, dating a popular girl, and going to parties. But in doing so he ignores BFF Michael, and isn't getting any closer to the girl he really loves, theater nerd Christine. The SQUIPs soon take over the entire high school population, until Michael teams up with Jeremy's depressed dad to save him and the school. Again, besides the SQUIP part, it's not very original, but it's told with such charm and heart in a way that really seems to speak to the audiences, that it's impossible to resist the pull.

Be More Chill opened on Broadway last month to mixed reviews, propelled there by the popularity of the cast recording of the original 2015 production at a New Jersey theater. But Cherry and Spoon, how can there be a local production of a play currently running on Broadway, when typically shows aren't available for regional productions until after they close on Broadway AND the tour has completed? That's a great question. From what I hear this is a different (earlier) version of the musical, that apparently is different enough to allow for regional productions while the Broadway production is happening, but I'm not really sure how these things work. My friends at Minnesota Theater Love saw it on Broadway and were unimpressed, but they loved MMT's production. The poor Broadway reception may be because this sweet and simple little story is better told in a smaller house without crazy high tech effects, which is what MMT does so well (last year they turned Broadway flop High Fidelity into one of my favorite shows of the year).

Another reason for the success of this Be More Chill is lead actor Maxwell Emmett Ward, whom I named my "One to Watch" last year because of fantastic performances in four very different supporting roles in 2018. I'm now feeling quite validated in my choice. As Jeremy (the first leading role I've seen him in), Maxwell is so natural, charismatic, and relatable. His Jeremy is an underdog hero to root for, full of quirks and charming character choices. And he sings beautifully to boot! He's surrounded by an incredibly talented and energetic young cast, plus one grown-up - Christian Unser ably playing all of the adult roles from dad to drama teacher to scary SQUIP pusher. Highlights in this young and talented cast include the sweet-voiced  and equally adorkable Caitlin Featherstone as Christine, an affable Jim Belden as Jeremy's BFF Michael (with a sweetly sad rendition of "Michael in the Bathroom"), and Mike Tober as the Keanu Reeves-like SQUIP.

Director Sara Pillatzki-Warzeha gets great performances from everyone in the cast, and choreographer Abbi Fern has created some fun, young, energetic dances. Music Director Anna Murphy directs the six-person band on this catchy, fun, clever score. They're seated in a balcony to the right of the stage, and won me over the moment they put on their marching band hats (that's where I was in HS, BTW). Scenic Designer Robin McIntyre has created a colorful two-level set, and costume designer Mandy Parmeter has dressed these kids like today's typical teenager, along with creating some fun character-specific costumes for the Halloween party.

Be More Chill is a whole lot of fun, for young people and grown-ups alike. It's a fresh and modern retelling of an age-old story, that despite the current references is relatable to anyone who has ever been a teenager in any decade. Head to Illusion Theater this weekend, bring your favorite teenager or just go yourself. Click here for more info and tickets.