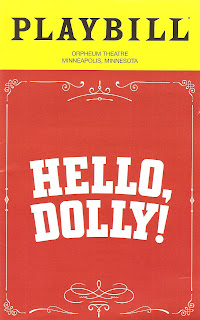 Friends, I think it's safe to say that the long-awaited spring has arrived. And our reward for making it through the long bleak winter is the tour of the recent Broadway revival of the classic musical Hello, Dolly! The luscious old-fashioned (in a good way) show fairly leaps off the stage in an explosion of music, romance, dance, color, and the hopeful life of springtime. Bette Midler won a Tony in the title role a few years ago; the tour needed big talent to fill those big shoes. They've found it in Broadway legend Betty Buckley. I was fortunate enough to see the Divine Miss M on Broadway, and while the two actors are very different in ways I can't quite articulate (perhaps Bette is more comic and almost zany, Betty more earthy and grounded), Betty is quite divine in her own way, totally makes the role her own, and charms everyone in the room. The 55-year-old musical with a strong female leading role has held up relatively well, and the creators have pulled out all the stops to make this show a musical theater lover's dream. Dolly is staying in Minneapolis for two weeks, before she has to go away again, leaving the world a little duller in her absence. (Click here for info and tickets.)

It's the late 19th Century in New York City, and matchmaker/dance teacher/entrepreneur Dolly Levi is tired of working to make everyone else's lives better at the expense of her own. She decides to marry the noted "half a millionaire" Horace Vandergelder, and asks her beloved deceased husband for a sign to move on. In order to catch the gentleman, who is one of her clients, she sabotages the other matches. He's supposed to marry the widow Irene Molloy, owner of a hat shop, but Dolly quickly squashes that. Instead Irene falls in love with Horace's employee Cornelius who, along with his friend Barnaby, has come to New York City for an adventure. Said adventures include a parade, a dinner they can't pay for, a quick trip to jail, and falling in love. But this is Dolly's story, and when Dolly decides she wants something, she gets it, for better or worse.*

After seeing this revival for the second time, I finally downloaded the cast recording, having fallen even more in love with Jerry Herman's score. The full and lush pit orchestra, conducted by Music Director Robert Billig, really brings to life these wonderfully classic songs like "Put on Your Sunday Clothes," "Before the Parade Passes By," and of course the title song. The dance numbers (choreographed by Warren Carlyle) are just over the top gorgeous, everything you want and more from this type of show.

Everything about this show is big and beautiful, including the breath-taking array of period costumes with more bustles, ruffles, hats, gloves, parasols, and darling shoes than you can imagine. The set not only includes a trolley pulled by a horse (not a real one), but also a train, both of which drive across the stage at various times in the show. The main sets (Irene's hat shop, Horace's feed shop, and the Harmonia Gardens) are all beautifully detailed, and endless scrim after scrim shows us scenes of the greatest city in the world at the turn of the last centry (scenic and costume design by Santo Loquasto).

I will admit it, I knew Betty Buckley first as Abby in the TV show Eight is Enough, in the same way that I knew Patti LuPone first as Becca's mom in Life Goes On (don't judge, I grew up in the Midwest on a steady diet of television, far from the great white way). On stage, Betty is perhaps most well known for singing the best song in Cats (you know the one). It was an absolute delight to finally see her perform on stage. Her Dolly is so wise and funny, and the moments in which Dolly talks to her beloved departed husband are so beautifully real and vulnerable. Dolly has several monologues delivered directly to the audience, and Betty makes eye contact and waves at those sitting close to the stage, but still manages to engage everyone in that huge room. Betty Buckley going on tour with this show is a gift to America. She's surrounded by a terrific cast, including Lewis J. Standlen as Horace Vandergelder, making it impossible to hate the grumpy old man, so funny and charming despite the character's shortcomings. The four young lovers are all charming, fun, and full of spirit and defining character choices (Analisa Leaming as Irene, Kristen Hahn as Minnie, Nic Rouleau as Cornelius, and Sean Burns as Barnaby). An all around dreamy cast.

This is a show in which the audience applauds revelations of set and costumes, but fortunately there's substance below the spectacle, namely the story of this strong woman who dictates not only her own fate but those around her. It's just a perfectly executed revival of a beloved classic.

Hello, Dolly! continues at the Orpheum Theatre on Hennepin Avenue in downtown Minneapolis through April 28.


*Plot summary borrowed from what I wrote about the 2014 production at Chanhassen Dinner Theatres.