"Pop Goes the Noggin" by SOS Theater at Gremlin Theatre 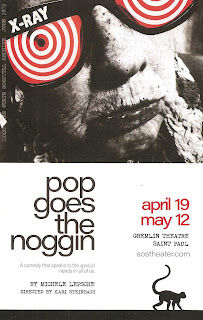 New #TCTheater company SOS Theater debuted a year and half ago with the dark comedy / family dramedy Roller Derby Queen. I really enjoyed that play, calling it "smart, funny, and well-written, with quirky but real characters," and was looking forward to their second outing. Pop Goes the Noggin is another new play written by Michele Lepsche, a dark comedy featuring quirky characters. Unfortunately it's an example of the proverbial sophomore slump as the great ideas don't quite come together, perhaps because due to an unexpected illness the playwright was unable to finish the play, which was completed by director Kari Steinbach and cast member Greta Grosch (one of the writers of the Church Basement Ladies series). But the play has an interesting premise, and a cast of unique and endearing characters (some more defined than others). There's definitely potential there, and it would be interesting to see it again after a round of revisions.

The play takes place in 1972 at Loon Lake State Hospital in Northern Minnesota. A quick Google search tells me that while fictional, Loon Lake appears to be based on the very real Moose Lake State Hospital, Minnesota's fourth "hospital for the insane," active from 1935 to 1995. Our story takes place on Ward One, which has more freedoms than the stricter Ward Seven. The five female patients are looked after by Dr. Plotzie (Tyus King Beeson), Nurse Triplet (Greta Grosch), and orderly Johnny John (Taylor Evans). Patient Shirley Jean (an endearing performance by Ellen Apel) functions as a sort of narrator, speaking directly to the audience and bringing us into her world. She's that character who may not be very smart, but is somehow wise beyond her IQ. Mamie is the smart girl (with an IQ of 138, she tells us and everyone repeatedly), sent to the hospital years ago by her unknown family, presumably because she's in a wheelchair (played by able-bodied actor Elizabeth Efteland, who's great, but this is a huge missed opportunity to cast an actor in a wheelchair, and an insult to the local disabled acting community). Tiny (Katherine J. Lee) only speaks in Magic 8 Ball, and tough college coed Georgie (Isabel Middleton-Watts) can't wait for imminent release, while at the same time scared to return to her old life. The groups seems to gel fairly well together, although not without family squabbles. Until stressed housewife Bella (Catherine Johnson Justice) arrives to disturb the status quo. She has a key to the patient files and looks through them all (motivation unclear), finding the address for Mamie's family. This, combined with Shirley Jean's determination to go to the State Fair and see Neil Diamond, leads to a unsanctioned patient excursion to the Cities, which doesn't end well.

There are some nice character moments in the play; Johnny John and Shirley Jean's relationship is sweet, and Nurse helping Tiny to take that first step towards finding her own voice is touching. The cast is great and they all bring humanity and depth to their characters, although some are given more to work with than others. The program has some cute retro ads, and the "Notes on Pop Goes the Noggin"  (short story? memoir?) is dark and beautiful and poignant. I wish more of that had made it into the play.

The entire play takes place in the communal space in the ward, Gremlin's thrust stage transformed into what looks like a hospital waiting room, but with a few games and books to reflect the life of the residents. I was hoping for '70s costumes, but Loon Lake Hospital residents don't have access to the latest fashions, instead wearing scrubs and sweats and robes, although they do all have cute matching tie-dyed t-shirts and the nurse has a prim and proper uniform. Tunes of the era (specifically Neil Diamond) set the scene before the show and during scene transitions. (Set and props design by Katie Phillips, sound design by C. Andrew Mayer, costume design uncredited.)

Pop Goes the Noggin continues through May 12 at Gremlin Theatre, next door to Lake Monster Brewing, which offers a daily selection of food trucks for a fun beer/dinner/theater combo evening.