"The Drowning Girls" by Freshwater Theatre at the Crane Theater 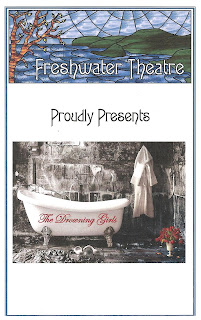 Three victims of an early 20th Century English serial killer have their say in the haunting play The Drowning Girls, receiving its regional premiere with Freshwater Theatre. Based on a book about this true story, The Drowning Girls examines the life of these three women, their hopes in marrying a seemingly charming man, and the dire consequences when it's revealed he's a con man and serial marryer/murderer, after their money only. The play is ingeniously staged with three onstage bathtubs, shower-heads periodically pouring water into them, the three hardy actors working in water and wet clothes for the entire 75-minute show (which probably explains why the theater was toasty warm, a nice treat on a cold late winter day). The short run closes this weekend - just two remaining performances; click here for more info on how to see this fascinating, gripping, and well executed story.

This it not a linear story. We start with the three women dead in the bath, and from there the story is woven with bits and pieces of the narrative. The three women (played with much empathy and individual personality by Danielle Krivinchuk, Heather Burmeister, and Megan Kim Anderson) take turns telling their similar stories, and stepping in as other characters in each other's stories. It's cleverly written (by three credited playwrights, no less) with interlapping dialogue, building to a conclusion we know is coming, giving voice and humanity to these victims of a cruel man, rather than letting the murderer have the last word. Under director Ben Layne, the flow of the interrelated stories is clear, concise, and affecting.

I'm hugely impressed by these three women's ability to act and stay in the scene while immersing themselves in water. It's a cool effect that doesn't distract to the story, only adds to it. Much water is spilled and splashed onstage in Seán McArdle simple and function set design, consisting solely of three period bathtubs with showers on a large mat, framed by crisscrossed white metal arches. Props (such as newspapers and flower bouquets) are neatly stored inside each bathtub, and are therefore also wet. The beautiful sepia-toned period dresses and skirts (designed by Andrew Lester) remain soaked throughout the show, and the actors navigate all of these possible complications gracefully. The sound design (by Scot Froelich) includes some period appropriate music, as well as water sound effects.

The Drowning Girls features a tragic and fascinating true story, well constructed into a concise and moving play, with all elements thoughtfully rendered by the team at Freshwater. The only flaw is the short run, so act fast!