"Cry It Out" at Yellow Tree Theatre 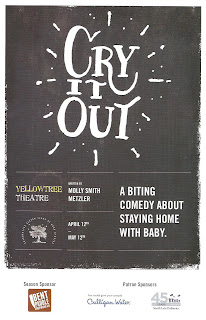 There's been a lot of crying at Yellow Tree Theatre this season (the classic play The Miracle Worker about a deaf and blind child learning to communicate, the new musical Flowers for the Room about a woman in a coma, plus tears of laughter at the original Minnesota comedy Miracle on Christmas Lake). But fortunately their final show of the season, the regional premiere of the new play Cry It Out, despite having the word "cry" in the title, is a comedy. Although not without poignant moments and very relatable pain. It's not an easy pat sitcom with solutions found in 90 minutes. Rather it's an exploration of the joy, pain, confusion, isolation, friendships, and conflicts associated with being a new parent. No need to bring tissues for this one, but be prepared to laugh, and if you've ever had young children, commiserate, as the excellent cast and creative team brings us right into this messy, funny, real world.

The play takes place on the back porch of a middle class Long Island home, within sight of a wealthy neighborhood. It doesn't take too much imagination to translate the extreme socioeconomic class differences on Long Island to our own Twin Cities neighborhoods. The back porch belongs to Jessie, whose husband grew up in the wealthy neighborhood. They're a two-income family from Manhattan, moved out to the island to raise their child, where Jessie is hoping to become a stay at home mom (if only she can convince her husband). Jessie soon meets her neighbor Lina, who is living with her new baby and her partner in his mother's home. They're a working class family, and Lina needs to go back to work soon to save up for a home of their own. They bond in the backyard over coffee, telling each other the real stuff about what they're feeling and how difficult having a baby can be. Their cozy coffee klatch is interrupted by Mitchell, from one of those big houses on the cliff, who's worried about his wife. He's concerned because his wife Adrienne isn't acting like he thinks a new mother should, and wants the women to invite her over to chat. Needless to say it doesn't go well; Adrienne has nothing in common with the other two moms and has her own ideas of what she wants her life to be. All three of the women have to make choices about their lives and their families, which may not be the choices they'd like to make, but they do the best they can within the confines of their lives and situations.

One of #TCTheater's funniest actors, Angela Timberman, has taken to directing the last few years, to wonderful effect. She directs her terrific cast in performances that are very funny, grounded, and real. Taous Claire Khazem is very likeable and relatable as Jessie, who tries so hard to be nice and helpful that it's difficult for her to stand up for what she wants. Katie Consamus is a hoot as the girl from the South Shore, but not without depth as Lina faces some tough choices. Matt Wall's Mitchell is earnest and well-meaning, even if he goes about it the wrong way. Last but not least, Audrey Park only appears in two scenes but makes an impact as Adrienne, who may not act like her husband (and society) thinks a mother should, but is sympathetic despite her sharp edges.

Yellow Tree's intimate thrust stage has been transformed into a detailed and realistic back porch by designer Joel Sass, complete with plants and toys, and a facade of a two-story house with screen door. As always at Yellow Tree, the song selection for scene transitions is spot on, with cool and different arrangements of familiar songs, always matching the tone of the scene (sound design by Montana Johnson). Once again I wish all theaters would publish their playlists in their programs!

What I love about this play is that there's no resolution. It's just a slice of life during a very specific time in these women's lives as they're adjusting to this new life they're charged with. The play nicely illustrates how class and income can affect and limit our choices, and how not all women, not all mothers, want the same thing for themselves and their children. And that's OK.

Cry It Out continues through May 12. I'm done telling you it's worth the drive to Osseo, because Yellow Tree Theater always is (and it's not that bad of a drive). Also check out their exciting upcoming 12th season.