"Red Hot and Cole" at Theatre in the Round 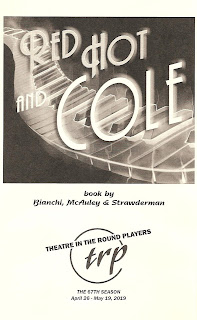 Cole Porter wrote many a song in the great American songbook, and dozens of Broadway musicals, his most famous being Anything Goes and Kiss Me Kate (currently being revived on Broadway). I previously learned about his career in musical theater and film at an installment of the Ordway's Broadway Songbook six years ago, but I didn't know much about his personal life. The musical revue Red Hot and Cole, now playing at the longest running theater in Minneapolis, Theatre in the Round, fills in those gaps. Song after hit song, interspersed with scenes from Cole's life and his fabulous and famous friend, all taking place at the swankiest cocktail party. It's an evening filled with great music and a deeper understanding of the man behind so many witty, clever, tuneful songs.

We meet Cole after his first Broadway show, a flop called See America First, which he wrote in his early 20s. He's being consoled by his famous and wealthy friends at a cocktail party, everyone dressed to the nines, and from there we progress from one cocktail party to another through Cole's life. He lived in Paris for a time, hobnobbing with other ex-pat artists and marrying his wife Linda - a marriage Wikipedia calls "mutually advantageous;" Porter was gay, a fact hinted at in the show but not overtly addressed. He returned to Broadway with much success, until a horse-riding accident left him with severely injured legs and constant pain. He makes a career resurgence with Kiss Me, Kate, but the story gets a bit melancholy as those carefree days of his youth are behind him.

The story of Cole's life is told in short scenes between over 30 of his songs. We don't really go too deep into any aspect of his life, but enough to get a picture of who he was. The show is also a mini history of the Broadway/Hollywood/artist scene of the 20s, 30s, and 40s, which is fun. His most popular songs are all performed, including "You're the Top," "Miss Otis Regrets," "Begin the Beguine," "It's Delovely," "Another Op'nin, Another Show," and on and on. The strong 11-person cast is accompanied by the classiest of arrangements - grand piano (Kathleen Hollar) and upright bass (Spencer Becker), under music director Christopher Stordalen. And the best part is - actors are not miked because it's not needed in the intimate in-the-round space.

Eli Coats personifies the dashing composer whom everyone loved. Katilin Klemencic gives a lovely and nuanced performance as his wife Linda. Other highlights in the cast include Jacleen Olson as socialite Elsa Maxwell, and a pretty great Ethel Merman impersonation; Mark L. Mattison hamming it up with many different accents as several of Cole's famous friends including George S. Kaufman and Noel Coward; and Kathleen A. Hardy as Paris nightclub owner Bricktop.

The in-the-round stage, which the audience walks through on their way to their seats, has been transformed into a chic and swanky apartment suitable for cocktail parties, with a happy pink, purple, and blue color scheme, bench seating, a bar, and lots of cocktails. The cast is dressed in elegant period clothing as appropriate for parties with wealthy artists and their patrons. (Set design by John A. Woskoff, costume design by Morgan Groff.)

Red Hot and Cole continues weekends through May 19 at Theatre in the Round in Minneapolis' Cedar-Riverside neighborhood.