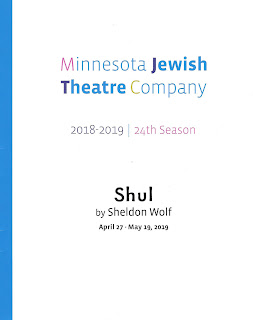 On a weekend when there was yet another deadly attack on a synagogue, I can think of no better reaction to the devastating news than to go to our local Jewish theater and support Jewish artists, Jewish stories, Jewish culture. Minnesota Jewish Theatre Company's world premiere new play Shul, another word for synagogue, is especially appropriate as it deals with an inner city synagogue in danger of closing, and even references a bullet hole in the window. It's a beautiful, funny, poignant story about a group of people trying to keep their culture, traditions, and community alive in the face of ever-changing modern times.

Shul takes place in a shabby run-down synagogue that has been there for generations, but membership has dwindled in recent years to the point where there are only a handful of members left. They gather on this day to discuss the option of selling their beloved shul, since they can no longer afford the upkeep and it's rarely used. It doesn't even have a Torah (and as I heard someone behind me say, "then you don't have a synagogue"). Longtime members Nate (Raye Birk), Miriam (Nancy Marvy), Friedman (Paul Schoenack), and Ezra (Charles Numrich) disagree about what to do, and look to their new young president Abe (Avi Aharoni) for guidance. Another member none of them have met before, Golden (Nathaniel Fuller), shows up and pushes for selling; he's harboring a grudge against his family who were founders of the synagogue, but didn't treat him so well. Real estate agent Heidi (Dexieng Yang), who has a history with Abe, also pushes them to sell for whatever they can considering the amount of repair work that is needed. But when the prospective buyer John (Jôher Coleman) turns out to be Sikh, they're given pause; if they can't find a Jewish buyer, they'd like the building to be used for non-religious purposes. But their options are limited, and difficult decisions need to be made balancing tradition with reality.

Beloved #TCTheater (and nationally known) actor Robert Dorfman makes his directorial debut with this piece. He does a wonderful job balancing the humor with the more heavy elements, and gets great performances from this wonderful cast. They all of create such lived in, real characters, who feel like a loving if slightly dysfunctional family. The design also feels real; the synagogue is artfully rendered by set designer Michael Hoover with such detail that you can almost smell the decay. Costume designer Rebecca J. Bernstein has clothed the cast in character defining pieces; dear old Ezra's clothes look as if he's slept in them for a week.

It's an interesting dilemma, and one that is actively happening around the country right now. Dramaturg Jo Holcomb notes in the program that membership in Jewish congregations, as well as other major religions, is declining for a number of reasons. As in this play, congregants skew older; young members are a rarity. I love big old houses of worship; I can feel the spirit of the many people who have come there for comfort and questioning. But what to do with those big old buildings when their use is diminishing? Is there a better way to congregate and worship, holding on to traditions but adjusting to the needs of the modern world?

Such are the questions brought up but not answered by Shul, a timely and relevant new play. Membership to religious institutions may be dwindling, but there was a full house when I attended MJTC this weekend. People are still congregating to share stories, remember our history, and grapple with the future. That gives me hope.

Shul continues at the Highland Park Center Theatre through May 19.