"The Brothers Paranormal" by Theater Mu and Penumbra Theatre 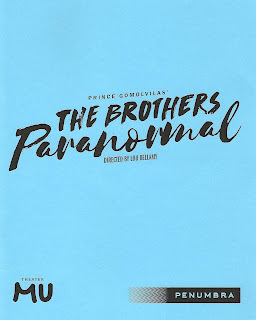 For the first time in their long and celebrated histories, #TCTheater's African American and Asian American theaters (Penumbra and Mu) are joining forces in the regional premiere of the new play The Brothers Paranormal. In it, an African American couple hires two Thai brothers to investigate some mysterious happenings around their house. The result is a totally captivating thriller that also deals with some pretty serious issues surrounding culture and mental health. It's a play that's both wildly entertaining, and speaks to our world today in a meaningful and thought-provoking way. And as usual with these two theaters, the production is top notch, with an excellent cast and spot on design. Don't miss this historic and fantastic #TCTheater collaboration!

Brothers Max (the younger, born in America) and Visarut (the elder, born in Thailand) have a business investigating paranormal activity. Max recently moved home to care for his schizophrenic mother and alcoholic brother, and they seem to be in a good place now. But the business is not doing very well, so Max, who handles the business/client side, finagles to get them a client. Max and Visarut, who handles the ghost stuff, go to the apartment of Delia and Felix to see if they can see the young Asian woman that Delia has been hearing and seeing. Felix shares that Delia's mother was also schizophrenic, and is worried that Delia might have inherited her mother's mental illness. He's counting on the brothers to prove that the ghost is real and Delia, therefore, is sane.

Director Lou Bellamy creates a delicious tension with this smart, funny, trippy script by Thai-American playwright Prince Gomolvilas, and has assembled a cast that just couldn't be any better. As Delia and Felix, Regina Marie Williams and James Craven are the perfect embodiment of a loving couple that has been together for many years, and are individually moving as well as their characters face their own unique struggles. Sherwin Resurreccion and Kurt Kwan (Max and Visarut) should always play brothers, so believable are they - funny and bickering but supportive. Sherwin's character is sort of the driving character of the story, and he beautifully portrays the complex but incredibly sympathetic Max and everything he's dealing with (it's a lot). Veteran of TV and the national stage, Leslie Ishii makes her #TCTheater debut as the brothers' mom and creates a touching portrait of an immigrant who moved to America for her family but never quite felt at home. Lastly, I don't want to say too much about Michelle de Joya's role, but she is the personification of Delia's ghost, and what she does is incredible and terrifying and just might give you nightmares.

This is your chance to experience two of #TCTheater's best companies, and the intersection of their traditions. Besides that it's a thoroughly gripping play that will have you laughing, jumping out of your seat, and contemplating the deeper issues at play.

The Brothers Paranormal continues at Penumbra Theatre in St. Paul through May 26 (click here for info and tickets, or here for discount tickets on Goldstar).