"Ordway Cabaret, A Brand New Day: Rise Up!" at the Ordway Concert Hall 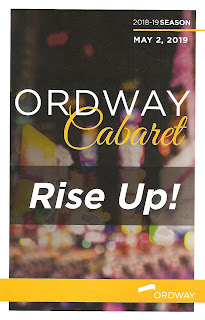 Last night the Ordway presented their second installment in their new Ordway Cabaret series. At this point it's a one-night only event (if you missed it you're out of luck, sorry), but they did also share it with almost 2000 students as part of the Ordway's education program. The first installment earlier this year was subtitled "Breaking Barriers," this one is "Rise Up!" and the third, coming this fall, will be "all about the ladies," i.e., about how women are portrayed in musical theater and how female audience members and performers respond to that (see also Not Fair, My Lady!). The Ordway Cabaret is similar to the Broadway Songbook series that the Ordway ran for a number of years, except that it's less about musical theater history and more about the performers' personal history as it relates to musical theater. I'm really loving this twist, because it shows in a very real way how much musical theater can affect our lives, both for performers and audience members. And as always with these types of shows at the Ordway, the phenomenal cast brings their hearts and souls to the wonderful performances of beloved musical theater songs.

Director Kelli Foster Warder, who is also the director of education at the Ordway, notes in the program: "These performers have come together to curate an evening of songs from ground-making Broadway musicals that shine a light on revolutionary moments in time. Throughout this process, we have been reminded of the power of stories and storytellers in our communities and on our stages." Now, more than ever, I look to artists and the arts for healing, connection, and empathy in a world where those things feel like they're slipping away. Each of the seven performers talk about a musical or a moment that meant something to them, and in some way changed them, inspired them, or simply allowed them to be more themselves. In between the stories we heard some gorgeous performances of songs from some of my favorite musicals, including RENT, Hair, Urinetown, Ragtime, The Color Purple, Into the Woods, and more.

Another thing that's remained consistent through the Broadway Songbook and Ordway Cabaret series is the incomparable Raymond Berg as music director, accompanist, and arranger (turning solos into duets, duets into group harmonies, and knowing when to let the song remain pure and simple). Everyone in this cast is a star in their own right, and all of them shared some personal and moving stories of their journey to where they are now:

All in all it was a highly entertaining and moving 90 minutes of music, theater, and stories. I'm looking forward to the next one.

The Ordway is an exciting place to be for fans of musical theater. They've got four Ordway Original productions coming up in the next 16 months (42nd Street, Smokey Joe's Cafe, the new musical Ever After of which I saw a sneak peek and am very excited to see, and Groundhog Day) as well as tours of two of the inspiring musicals mentioned above (Once on this Island and The Color Purple). Not to mention a number of special events and concerts (including the legendary Rita Moreno!). Check out the full list of performances here, and see you in St. Paul!