"The Play That Goes Wrong" Broadway Tour at the Orpheum Theatre 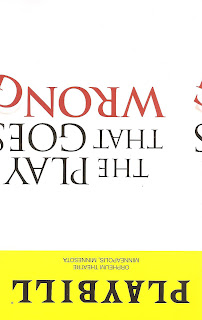 When something goes wrong at the theater, it can sometimes lead to a wonderful moment in which you get a peek inside the process and see how the actors react to the unexpected. When everything goes wrong, it leads to outrageous hilarity. Such is the concept of The Play That Goes Wrong, a 2012 British play (written by three playwrights from London's Mischief Theatre) that opened on Broadway in 2017, where it played for two years before moving to Off-Broadway earlier this year. Similar to Noises Off, it's a play-within-a-play that's so bad it's good. There's no subtlety in The Play, it's all super broad comedy, including pratfalls, spit takes, and falling scenery. They continue to pile it on until the whole thing collapses in glorious chaos. Broadway plays don't often go on tour, and the fact that this one is on tour points to the fact that it's a crowd-pleaser. The ridiculousness continues through Sunday only (click here for info and tickets).

The whole concept of the play-within-a-play that goes wrong is thoroughly and thoughtfully carried out, from the upside down marquis, to the ridiculous faux credits for The Murder at Haversham Manor in the playbill, to the actors wandering around the audience in character before the show. The meta nature of the show allows the actors as the characters to know and acknowledge they're in a play, and talk to and react to the audience. The more the audience laughs, cheers, or boos, the bigger their reactions. The eight-person cast portrays an American stage manager (Angela Grovey) and lighting and sound operator (Brandon J. Ellis), the latter stationed in a side balcony with a fake (?) light and sound board for much of the play, and the British cast including the director/president of the drama society presenting the play/everything else/actor Chris Bean (Evan Alexander Smith), and the rest of the ensemble of Haversham Manor (Jamie Ann Romero, Ned Noyes, Peyton Crim, Scott Cote, and Yaegel T. Welch). They're all completely committed to the broad comedic style of the piece, and go big in their own specific ways. My favorites: Ned Noyes, whose actor character hams it up for the audience in the most delightful way, doing anything for applause and laughter; and Evan Alexander Smith, with an improvised segment reacting to the audience and some spot-on Minnesota references.

The plot of Haversham Manor is that someone is murdered in a country estate in England, an inspector is called in, and the murder mystery is eventually solved to surprise effect. The plot of The Play is that these are horrible actors, and everything that could go wrong in the production, does. Actors are knocked out and replaced with someone unprepared, doors won't open, cues are missed, the set falls apart. But somehow they make it through the entire play, with such a frenzy of activity at the end that I couldn't quite follow the murder mystery plot, but that's not the point anyway. The point is to laugh the theater that we love so much. This is a show that knows what it is, and doesn't take itself seriously at all.

It takes a lot of serious work to pull off comedy this complicated, especially in all of the prop and set stuff that's happening. Especially because some of it could be dangerous (falling walls, dropping floors, swinging through the rafters). Everyone needs to be exactly where they're supposed to be at exactly the right time, and the cast pulls it off flawlessly under director Matt DiCarlo (original Broadway direction by Mark Bell). It's well organized chaos.

The set (designed by Nigel Hook) is a sort of a smallish manor set that doesn't take up the full space of the Orpheum Stage - a seemingly simple library or parlor, with a small second story. But what it does is quite impressive, as things fall off the walls at the perfect moments, then are replaced (magnets?). There are several jaw-dropping moments of things falling, and in the end, the walls come down (literally). This is one of those plays in which the stagehands come out at curtain call to take a well deserved bow.

The play will continue to go wrong, and wronger, in downtown Minneapolis for just a few more days. If you need a good, big, silly laugh at mindfully mindless broad comedy, perfectly executed by this traveling troupe, go see one of the five remaining performances of The Play That Goes Wrong.