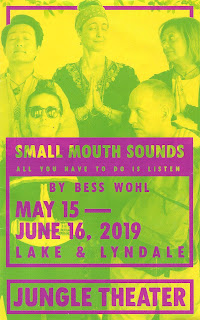 "Friends, @jungletheater's Small Mouth Sounds is exactly my kind of play: awkward, funny, profound, and full of one of my favorite things in theater that I rarely get - silence! Perfect execution by the yummy cast and the whole team."

This was my Instagram post upon arriving home from the Jungle last night, and it pretty much says it all. I'll expand on that a bit more here, but in general, this new play about six people on a silent meditation retreat is hilarious, heart-breaking, and very human. Visit the Uptown theater now through June 16 to experience it yourself (pro tip: the Jungle is one of the few theaters in town with Tuesday and Wednesday performances, which have lower ticket prices, better availability, and usually less Uptown crowd/parking/traffic issues than weekends).

Upon entering the Jungle's jewel box of a theater space, you see a stage bare except for six folding chairs in front of a simple room divider. The play begins as the six retreat participants filter in silently (well, most of them). The retreat guru gives them instructions and guidance through voiceover (the live hypnotic voice of Jay Owen Eisenberg) but is never seen. They're pretty much left to figure out things on their own within the rules of no talking, no bringing food to the room (bears!), and no cell phones. Spoiler alert: all three rules are broken. What happens for the next 100 minutes is a study in humanity - the absurdity of it, the hopelessness of it, and the connections that can be formed among strangers even without words. It's a challenging five days for our group but they all make it through, and seem somehow changed at the end of it, at least maybe a little.

The six characters are all very specific and well defined, even though some of them speak every few words throughout the play. We aren't told many details about most of them, just little hints, but it's enough to imagine a life. The play is really a study of acting without words, as the six actors have to create their character and tell their story mostly just with facial expressions and physicality, and they're all a wonder to observe. Christina Baldwin (who will break your heart with a look) and #TCTheater veteran Faye M. Price (a delight to see back onstage after working mostly behind the scenes lately) play a couple who seem to be happy, but whose relationship is at a crossroads. Christina and Faye beautifully portray the entire arc of the relationship with few words. Michael Curran-Dorsano is the earnest Ned (the only character whose name we know, because he charmingly wears a nametag), delivering a hilarious and heart-breaking monologue detailing the trauma that is Ned's life. Becca Hart brings depth to the gum-smacking millennial who's always on her phone, but is hiding a broken heart; Jim Lichtsheidl has some very specific and consistent character choices as a sweet man suffering an unimaginable loss; and Eric Sharp is just perfect as the yogi with a few issues of his own behind the zen veneer.

In a play with so few words on the page, it's really up to the director to shape the story, and Lauren Keating does so beautifully. Scenes are clear even without obvious plot points, and flow smoothly from one to the next; 100 minutes has never felt so short. Mina Kinukawa's minimalist set has a rotating circle with those six chairs on one side, three simple cabins on the other. There are no walls so we can see what's happening everywhere at once. And a lot is happening, especially on the actors' faces, if you watch closely.

It's really lovely to see a play that's so funny and so human, so beautifully brought to life by the cast and creative team, without a lot of words to get in the way of the emotions.