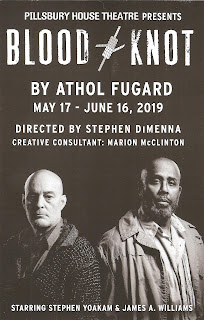 Despite being written almost 60 years ago in a country on the other side of the planet, Blood Knot, currently playing at Pillsbury House Theatre, feels very relevant to the here and now. Through the story of two brothers, one dark-skinned and one light enough to pass for white, South African playwright Athol Fugard explores the complex issues of racism and white privilege, before that term was in our collective consciousness. It's remarkable that this play was performed (for one performance only) in Johannesburg in 1961, with it's strong anti-apartheid message. But even in Minnesota in 2019, we still have lessons to learn from it. This is a powerful, intense, and sobering play, beautifully acted by two beloved #TCTheater veterans.

The story plays out over several nights spent in a shack in South Africa. It begins simply enough. Morris (the light-skinned brother) prepares for the return of Zachariah (the dark-skinned brother). In what appears to be a common routine for the two men, Zach comes in from a long, hard day's work, grateful for the foot salt bath that Morrie has prepared. They talk of simple things, and it soon is revealed that Morrie has returned home about a year ago after many years of being away. Zach and Morrie lived together as boys, but at some (never explained) point Morrie moved away and possibly lived as a white man; he can read and write while Zach is illiterate, he speaks with a different accent, and he knows what gentleman wear and say. Conflict arises when it's discovered that Zach's lady pen pal (encouraged by Morrie, who does the reading and writing) is white, and may be visiting soon. Both men realize how dangerous this situation is, so they explore the idea of Morrie meeting her as a white man, even going so far as to buy a new suit. They embark on a bit of play-acting that soon turns devastating, as Morris treats his beloved brother Zachariah the way that a typical white "gentleman" treats a black man in 1961 South Africa (or today in some places and situations). Prejudices that they didn't even know where inside of them come to the surface, and it's devastating.

Stephen Yoakam and James A. Williams play Morris and Zachariah, respectively, and both give powerful, raw, heart-breaking performances. They've known each other for decades, and that camaraderie and trust is evident. Directed by Stephen DiMenna (with assistant director Carlyle Brown and creative consultant Marion McClinton), the two and a half hour play has a slow build-up. But there's something beautiful about that, as we get to know these two characters while they unhurriedly perform mundane tasks like sewing, cooking, tidying up, and planning for the future. They feel like real people, so that when the explosion happens, it's horrifying, and both James and Stephen deliver all of the complex emotions.

Except for the Minnesota chill in the air, it feels like you're in South Africa when you enter Pillsbury's theater space. The shack is rendered with painstaking detail by set designer Joseph Stanley - patched together walls, different flooring, dingy bedding, and the little touches that make it a home. Both men wear artfully distressed clothing (designed by Trevor Bowen) that looks like they've been wearing them every day for years, in contrast to the beautiful new suit.

What's so brilliant and fascinating about this play is that the only difference between these two men is the color of their skin. They were raised by the same mother, grew up in the same place, had the same upbringing. But because one has lighter skin, he was able to go out in the world, get an education, interact with people of a different class, and assumed the privileges and prejudices that come with the way he looks and the way people look at him.

Blood Knot continues at Pillsbury House Theatre in South Minneapolis through June 16. It's a historically important and classic play that feels like required viewing for today's world.