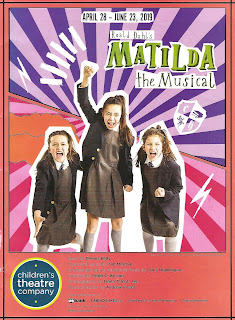 Please read about my decision to join the boycott of Children's Theatre Company here.

The successful musical Matilda (it ran for four years on Broadway, eight years and counting in the West End) is a musical led by child actors, so of course it's the perfect choice for Children's Theatre Company. Although they have a lot of talented adults on stage, and some of their shows even have entirely adult casts, what they do best is nurture and showcase the talent of #TCTheater's youth. And what a bunch of revolting children they are. Nine exuberant, precocious, stupidly talented kids lead us through this dark but inspiring story by Roald Dahl (who also brought us Charlie and the Chocolate Factory, and likes to show children getting the best of some truly cruel adults). The show is darkly funny yet surprisingly moving, with fantastic performances from the cast, young and old.

Matilda is an exceptionally bright 5-year-old (played by an actor about twice that age, because no 5-year-old can be expected to lead a musical) who had the bad luck of being born to parents who value neither her nor her intellect. It's really difficult to watch these neglectful parents constantly belittle their child, and understandable when Matilda gets her revenge by bleaching her dad's hair and gluing his hat to his head (because "sometimes you have to be a little bit naughty," which I guess is the child equivalent of "sometimes being a bitch is the only thing a woman has to hold on to"). Matilda finds a kindred spirit in her teacher Miss Honey, as sweet as her name, despite the abusive nature of the school and its headmistress Miss Trunchbull. Miss Honey supports Matilda in her gifts (which not only include the ability to read novels at the age of five, but also telekinesis), and in exchange Matilda helps Miss Honey solve the mystery of her parentage. There's a lot of wacky fun and dark comedy, but in the end this is a story about two people finding love and a home in each other.*

Highlights of CTC's production are many, including:


*Plot summary borrowed from what I wrote about the Broadway tour two years ago.