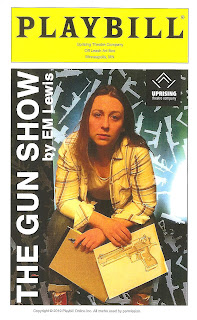 Every day there is another news story about people being killed by guns - mass shootings, gang violence, accidents, police shootings, and suicides. The numbers are staggering. And the worst part is, after each horrific occurrence, nothing changes. If anything, it only makes the two opposing sides double down on their firm unchanging opinions. That's no solution. Nothing changes, and more people die, and all of us live in fear. In her play The Gun Show, playwright E.M. Lewis says something to the effect that guns are what helped to build this great country of ours, but guns were never the point. Freedom was the point. And it doesn't feel very free right now, living with the fear of gun violence every time we step outside our home (and also inside the home for many people). The play had its first reading six years ago, and sadly grows more relevant and necessary every day. It's a fitting choice, then, for Uprising Theatre Company, a newish #TCTheater company that regularly partners with local non-profits to make a real difference in the community, beyond sharing important stories. This play is the second in their 2019 season that is entirely focused on gun violence, a much needed conversation to have.

I first heard about this play in 2015, when a few excerpts were read at a fundraiser for Protect Minnesota, a local organization that works to end gun violence. The next year I saw the full play at the Minnesota Fringe Festival, which I had forgotten until I was in the theater and it began to feel familiar. But it's definitely worth seeing again (or for the first time), to witness the very personal story of one person's changing relationship to guns. I wrote in 2016 that the playwright "speaks very plainly, directly, and conversationally about her experiences with guns, both the good and the bad. Growing up in rural Oregon, her family always had guns and she herself learned to shoot from her soon-to-be husband. She also tells a story about when she was held up at gunpoint while working in a book store, as well as a personally devastating experience that forever changed her life."

Curiously, the role of the playwright is usually played by a man, as specified by the playwright herself (perhaps part of the distance that she talks about). But Uprising cast a woman, which just feels right, and much more authentic. That woman is Lauren Diesch, who gives an impassioned performance. The play is a 60-minute monologue, with "the playwright" speaking directly to the audience in the intimate (read: tiny) space at off-leash area art box. She is literally in your face as she paces throughout the space, making eye contact and drawing us all into the story. Director Emily England pulls out all of the emotions in the script, and even some humor. The performance space is sparsely decorated with a single table and chair, and a bookshelf full of memorabilia, some of which she pulls out and shows to the audience. It's very effective and personal storytelling.

The playwright urges both sides to meet somewhere in the middle. A middle where there are sensible gun laws about safety, training, and who should have guns, but also an acknowledgment that people use guns for hunting, recreation, and self-defense. Uprising has partnered with Moms Demand Action for Gun Sense in America and Survivor Resources, a local organization that "provides immediate and long-term grief support for family and friends affected by suicide, homicide, overdose or accidental death." Both organizations have materials and representatives at the show, and Uprising facilitates a post-show discussion after every performance, truly putting into practice their belief that "stories can change the world."

The Gun Show continues at off-leash area art box in South Minneapolis through May 18. Click here for info and times, and to purchase $20 tickets (also available on a sliding scale).