"How It's Gon' Be" by Underdog Theatre at Mixed Blood Theatre 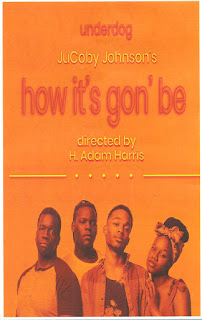 Two and a half years after their debut, new #TCTheater company Underdog Theatre, whose mission is to "create art for the underserved, underrepresented, and unheard," is bringing us their fourth play, and third world premiere new play. How It's Gon' Be is a beautifully written play by JuCoby Johnson, a talented young actor who's appeared on many stages around town in the last several years. As director H. Adam Harris succinctly put it on opening night, it's a play about love: love between parent and child, love between friends, romantic love. It's a funny, sweet, poignant coming of age tale with characters that feel real and modern, beautifully brought to life by a terrific cast. It's exciting to see young black artists playing all the roles - actor, director, playwright, producer - to tell these stories that need to be told.

The story centers around 16-year-old Jahaan (Underdog's Artistic Director Kory LaQuess Pullam), who has lived most of his life alone with his mother (Aimee K. Bryant) while his military father (Brian Grandison) is deployed on assignments around the country and the world. Consequently he doesn't have much of a connection with his father, who returns home on a hot summer day after a year away. Like any teenager, he just wants to hang out with his friends, sweet Terry and tough guy Rashad (Wariboko Semenitari and Dan Ajak, respectively, neither of whom I've seen on stage before and both of whom impress). And then there's Lady (Rajané Katurah), Jahaan's childhood friend who may become more than that. Every character is at a crossroads in their journey - mom and dad aren't sure if they can continue to make this long-distance thing work, Jahaan is struggling to connect with his absent father, and his friends are all going through changes. Nothing is really resolved, but progress is made, and you get the sense that these characters lives will continue on a trajectory that has changed because of the events of these few days.

Jahaan is a writer who's going to a mostly white art school, which has somewhat distanced him from his friends, but also gives him the support to be the artist he is. The writer aspect allows playwright JuCoby Johnson to use lyrical writing in the play. At times the action stops while a character recites one of Jahaan's poems, full of beautiful imagery. The writing is musical, but there's also actual music included; when you have Aimee K. Bryant and Rajané Katurah in the cast, it would be a waste not to have them sing. Both share their gorgeous voices, but not in a full out musical sort of way, not in a way that distracts from the story, but in a way that feels organic and adds to the lyrical storytelling. Director H. Adam Harris successfully weaves together the grounded family and friend scenes with the ethereal poetry monologues.

Mixed Blood's black box theater is set up as it has been for the last year or so, with the stage in one corner of the space. But some chairs have been removed right in front of the stage, which allows the story to spill out into the audience when Jahaan is on the street hanging with his friends. The overflowing garbage can, park bench, and flickering street lamp are a nice touch. On stage, simple set pieces represent the family kitchen and a living room in Lady's home (set design by Leazah Behrens).

How It's Gon' Be continues through June 9, with all tickets pay-what-you-can starting at $5. Click here for tickets, and if you're able, consider paying more to support these artists in the important and needed work they're doing.