"Peter and the Starcatcher" at Daleko Arts 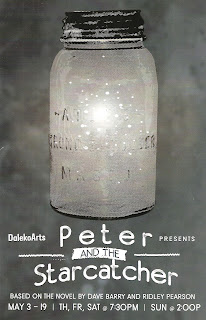 DalekoArts, a professional theater in New Prague, Minnesota on the very southern edge of the metro area, is closing out their seventh season with the multiple Tony-winning Broadway play-with-music Peter and the Starcatcher. It's a charming, quirky, innovative little play, and therefore a great choice for Daleko. This is my fourth year attending their spring musical(ish) and I continue to be impressed with the care and energy they put into the work that they do. Season 8 looks just as promising, with a walking ghost tour around historic downtown New Prague, a Scrimshaw Christmas comedy, a play about 19th Century mathematician Ada Lovelace, and the hilarious musical Spelling Bee. If you're in the mood for a theater road trip (about an hour from the cities), head south to Daleko.

Peter and the Starcatcher is based on the 2004 novel Peter and the Starcatchers by Dave Barry and Ridley Pearson, a prequel to the Peter Pan story with which we're all familiar. Much of the story is explained to us in narration by the ensemble. The title character is an unnamed and unloved orphan who's sold into slavery along with two other boys. They're being transported on the ship Neverland, captained by Slank and his rough and rowdy crew. Also on board are 13-year-old Molly and her nurse, Mrs. Bumbrake. Molly's father, the well-to-do and important Lord Aster, has entrusted her to the captain while he travels on a more dangerous route aboard the Wasp, on a mission for the queen. He's transporting a trunk of the mysterious "starstuff" that unbeknownst to him has been swapped with a similar trunk of worthless sand by the devious Captain Slank. Aster's ship is overtaken by pirates, namely the dastardly Black Stache and his sidekick Smee, and much hijinks and hilarity ensue as the pirates try to get the treasure and Molly and the boys try to save it and her father. The action continues in the second act as they all land on a colorful tropical island. It's a sweet and engaging story with a heroine and a hero to root for, clever puns and alliterations mixed with modern references, and a theme of home and friendship and belonging, as the unnamed boy becomes the legend that is Peter Pan.*

That's a lot to happen on Daleko's tiny stage, but happen it does. Director Amanda White makes good use of the space in such a way that it never feels crowded, with a brisk pace that keeps us moving through the story. Robin McIntyre's scenic design provides lots of platforms, stairs, ropes, ladders, etc. for the ensemble of 12 actors to climb on, jump from, run through, and hang off. The second act location shift from ship to island is accomplished subtly with some tropical fabric hanging over the wooden structures. Costuming (designed by Samantha Kuhn Staneart) is subtle too, especially in the second act opening number in which a few pieces turn the pirates into mermaids or the Italian food speaking natives.

This is a true ensemble piece, with lots of doubling of roles and physical theater, and this cast of mostly familiar faces on the Daleko stage works well together. College student Erik Dagoberg is a true find as Peter, so natural and believable as this lost boy who is found. Eva Gemlo, the sole woman in the cast, is a delight as Molly, expressive and emotive yet tough and strong as she leads the lost boys. Highlights in the ensemble include Michael Lee as as the lovely and loyal Mrs. Bumbrake, Jonathan Feld and Armando Harlow Ronconi as the adorably childlike boys, and Ben Thietje, gleefully chewing the scenery as Black Stache. Completing the strong ensemble and playing multiple roles are Mike Swan, Patrick Kozicky, Ryan Lee, Tom Karki, Vincent Hannam, and Anthony J. Sofie, who also provides the music direction for the few artfully placed songs.

The charming, funny, and surprisingly moving Peter and the Starcatcher continues at DalekoArts in New Prague for just one more weekend.


*Plot summary borrowed from what I've written about previous productions.