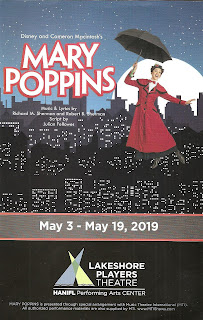 Do you know who your local community theater is? There are so many great community theaters in the #TCTheater area that it's impossible to keep track of them all. But I encourage everyone to find one in your area and support them. There are so many people working so hard for little reward other than seeing your smiling face in the audience. My local community theater is Lakeshore Players Theatre* in White Bear Lake, which opened a gorgeous new building about a year ago. The final production in their first full season in their new space is Mary Poppins, a show that celebrates imagination, determination, play, and family. I'll admit that the biggest draw to see this show was seeing one of my #TCTheater favorites Quinn Shadko as Mary Poppins, but the whole show is just darling. If you're in the Northeast metro be sure to visit them in the Hanifl Performing Arts Center, or check out what theater is happening in your neighborhood.

Everyone knows the story of the stern but fair nanny who appears out of the sky to care for Jane and Michael Banks. She teaches the children manners, feeds them their medicine (with a spoonful of sugar), and brings some much needed play into their lives. A walk through the park turns into a technicolor dream, with Bert the chimney sweep adding to the fun. They visit a "talking shop" and learn about the most splendid word, and have an adventure on the rooftops of London with the chimney sweeps. In the play Mary leaves and then comes back again, which allows for the appearance of Mr. Banks' terrible and terrifying nanny Miss Andrew, which makes everyone appreciate Mary more. Mr. Banks has work troubles, and Mrs. Banks feels neglected. Mary not only helps the children, but also helps to turn Mr. Banks from an insufferable embodiment of the patriarchy into a caring father and husband (there are a few people in today's world that I wish Mary Poppins would pay a visit to and whip into shape). And when the family is repaired and she is no longer needed, Mary Poppins flies away again, to return when and where she's needed.**


*Technically my closest local community theater is Mounds View Community Theatre, which does one show a year. This summer Joe Chvala is directing Man of La Mancha at a location a mile and a half from my house. How lucky am I?!
**Plot summary borrowed from what I wrote about Artistry's production last year.