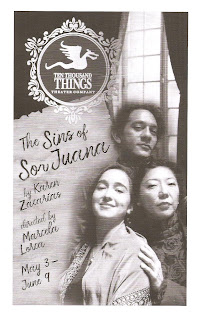 Ten Thousand Things' first post-MH season is in its conclusion, and we can now safety declare that TTT's retired founder and Artistic Director Michelle Hensley has taught us well, and her legacy of accessible, entertaining, engaging, meaningful theater for everyone lives on. From the hilarious Scapin, to the most moving Into the Woods, to the currently playing The Sins of Sor Juana, this season has been classic Ten Thousand Things. That is to say theater in its purest form without distraction, stripping away all the fluff to get to the purest heart of the story, and delivering it directly to the audience in a playful and immediate way. The Sins of Sor Juana is a fictionalized telling of the life of an inspirational woman ahead of her time, 17th Century Mexican poet and scholar Juana Inéz de la Cruz. It's a story that feels so relevant, as girls and women around the world are still denied opportunities for education. Sor Juana is a heroine for today.

The story takes place in 17th century Mexico, at a time when the Spanish were the colonizers, the Aztecs and other native people the colonized. We first meet Juana in the convent, happily studying and writing poetry. But that's taken away from her when some of her poems are published, causing the church to feel threatened. Padre Núñez, previously her friend and supporter, orders that all of her books, as well as her paper and pen, be taken from her. Ordered to cross-stitch with her fellow nuns, she still finds a way to write, stitching the words of one of her poems:


What wild ambition drives us
To forget ourselves, our past?

Who knew cross-stitching could be so revolutionary? Juana refuses to remove the stitches and goes on a hunger strike, causing her to hallucinate scenes from her life. The present morphs into the past and back again, as we learn how Juana came to the convent from the Viceroy's court. Hint: it involves betrayal by a man she loved and believed loved her (and maybe he did). When offered a compromise by the Padre, she refuses, swearing to never write again. She will write free and uncensored, or not at all.

TTT's new Artistic Director Marcela Lorca once again takes the helm, leading this terrific seven-person cast through the shifting times and places of the story with ease. Thallis Santesteban simply couldn't be better as our heroine; her Juana is so smart, strong, and sympathetic, but yet still human and filled with raw emotion. Novice #TCTheater actor Ava Saunders plays the novice nun with open-hearted innocence, representing the future. The other five actors are all familiar from various #TCTheater stages. Sun Mee Chomet is just a delight, as always, as a compliant fellow nun and Juana's rich patron in her court days, with lots of winks and comments to the audience. George Keller is strong as the head nun, but also brings such warmth and humanity to the role of Juana's court servant Xochitl (bringing the colonization issue to the forefront). Pedro Bayón plays different variations of the same character - the men who tried to bring Juana down - Padre Núñez and the Viceroy, who tries to sabotage her. Jason Rojas is an entertaining buffoon as Pedro, the Viceroy's right-hand man, and Ryan Colbert is suave and charming as Silvio, Juana's would-be seducer.

TTT shows are structured to be easy to travel; they take the show on the road, performing in prisons, homeless shelters, community centers, and rural communities. Just a few simple set pieces (designed by Cate Whittemore) are placed in each of the four corners of the performance space to represent a window or door or writing desk. They are fluidly and strategically moved around the square so that all sides get a good view of the action. The costumes, despite being portable, are quite elegant, with the women's fancy court dresses and the men's beautiful suits easily covered by a black cape when the scene shifts to the convent.

An important element of any TTT show, musical or play, is sound and music. Joining TTT for the first time in this role is Robert Everest, singing and playing beautiful Spanish ballads and adding the soundscape to the story.

Sor Juana was a women ahead of her time (and another example of a radical feminist nun). But maybe all women are ahead of our time, maybe that's how time advances - by women demanding that their voices be heard. We need this message now more than ever. And BTW Sor Juana's "sin" is pride. i.e., being a strong, smart woman who isn't afraid to speak up. A sin women are still paying for (see any woman running for president).

The Sins of Sor Juana continues at Open Book on Washington Avenue in downtown Minneapolis through June 9. (Pro tip: get there when doors open for seating 30 minutes prior to showtime to save your seat, then go get a coffee or other treat at the coffee shop downstairs.)