"Caught" by Full Circle Theater at the Guthrie Theater 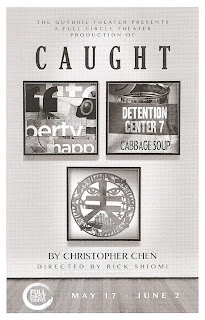 When I took the elevator up to the Guthrie Theater's 9th floor Dowling Studio, accompanied by high school students dressed for prom*, I didn't know what I was in for. I knew I was attending my third Full Circle Theater show, and I knew enough about them to expect it to be something thoughtful, well done, and relevant to the world we live in. And I knew this play had something to do with Chinese political art. All of those things are true, but Caught is so much more. It's a Russian doll of a play with layers upon layers of truth, reality, and artifice. By the time it was over I didn't know what was real, where the play ended and reality began. And that's the point of Caught, to make us question truth, reality, art, politics, even theater. It's a brilliantly written play (by California based playwright Christopher Chen), perfectly executed by director Rick Shiomi and the team. I'm not going to be able to tell you too much about it because I don't want to spoil the surprising and delightful trip, but just trust me - you need to see this play. And with all tickets just $9 as part of the Guthrie's Level Nine initiative, you have no excuse not to.

Let's start at the beginning. The audience enters the black box studio space on the stage end, where you walk through a gallery of art by Chinese artist Lin Bo (not a real person). The gallery owner greets you, and docents are there to talk about the art (again, not real people, played by actors Elizabeth Cates, Marcos Lopez, and Nathan R. Stenberg). At showtime, the gallery owner (Shana Eisenberg) announces a talk by the artist Lin Bo and the play begins (or has it already begun?). Lin Bo (one of three different but related roles expertly portrayed by Brian Kim) speaks directly to the audience (house lights up) of the ingenious "imaginary protest" he organized to mark the anniversary of Tiananmen Square. He then recounts his harrowing two years in prison, which was chronicled in a recent New Yorker article. It's a very affecting speech about the injustice of the Chinese government and the power of art in protest. After the speech is over, the action moves to a New Yorker office, where Lin meets with Joyce, the reporter who wrote the article (a sympathetic Erika Kuhn), and her editor Bob (Edwin Strout at his smarmiest). It's then that we find out Lin Bo isn't quite who we thought he was.

But the play's not over yet. In fact I thought the play was over a few times before it actually was. Where it goes next, you'll just have to experience for yourself. It's very clever and very funny, and keeps the audience on their toes. It's also very current, with debates about what is truth, the embellishment of truth for artistic purposes (see James Frey and Mike Daisey), cultural appropriation, and who has the right to tell whose stories. It's all very trippy as the play purposely doesn't give you anything solid and stable to hold on to, right up until the curtain call, but you're in good hands with director Rick Shiomi and this excellent cast (which also includes the always terrific Katie Bradley as, let's say, a playwright). Just go with it and don't get too attached to any idea of what's real and what's not.

The design of the play is beautiful, like a well lit art gallery with fascinating art work (created by real life artists William Ng and available for purchase) which you should definitely explore before the show. Walls are moved around to create the various spaces in the play, and subtle changes in lighting give clues about where we are in the story. (Scenic design by Mina Kinukawa, lighting design by Tom Mays).

Caught continues at the Guthrie's Dowling Studio through June 2. Trust me, you want to get caught in this complex, clever, funny, paradigm shifting web of a play.