"Tinker to Evers to Chance" at Artistry 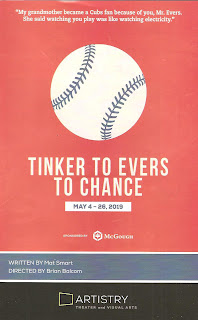 You don't have to be a Cubs fan to know the exquisite joy and pain of loving a baseball team. I've been a Twins fan my whole life, so I understand the highs ('87 and '91 world champs!) and lows (too many to name) that come with being a die-hard fan. In Playwrights' Center core writer Mat Smart's play Tinker to Evers to Chance, now receiving its regional premiere with Artistry, he very cleverly draws parallels between that specific and complicated baseball sort of love with other sorts of love - that experienced in families and relationships. When you've been disappointed by love (whether that's your beloved Cubbies losing a chance at the World Series by the skin of their teeth, or watching your wife die a slow and painful death), how do you let yourself love again? Is it worth it? You don't have to be a baseball fan to relate to the very human emotions explored in Tinker to Evers to Chance.

The title of the play refers to what Cubs fans will tell you was the best double-play combination in baseball history - early 20th Century Cubs shortstop Joe Tinker, second baseman Johnny Evers, and first baseman Frank Chance, memorialized in a poem called "Baseball's Sad Lexicon." This poem is recited on every home opener by Lauren and her mother Nessa, who have a special connection to it. Nessa's grandmother was given a jersey by Evers, and when Nessa was 17 she traveled to New York to meet Evers, who had recently suffered a stroke. When the play opens, Lauren has come home to Chicago to attend the now infamous Game 6 of the 2003 NLCS with Nessa, who has herself recently suffered a stroke. But this game becomes life-changing for Lauren for a different reason - Nessa has disappeared. This sends Lauren and Nessa's personal care assistant RJ on a journey through time as they try to find her. Nessa has left some clues in an unfinished play she's written about the life of Johnny Evers. Lauren blames herself for not being around more, and RJ for an incident that happened earlier in the day. I'm not going to tell you if/when/how they find her, but they do discover a bit more about themselves and the nature of love, for baseball and humans.

The story includes a few flashbacks, including some flash-way-backs. We see Evers give Nessa's grandmother the jersey in 1906, we see Nessa visit Evers in 1946, and we see Evers with his nurse after his stroke (as depicted in Nessa's play). Just two actors play all of the roles, and both are fantastic and have great chemistry together in every combination. And they both get a chance to play Evers, which is a fun gender-bending twist that also allows us to see different sides of him. As Lauren, Meredith Casey portrays all of the frustration, hope, and desperation at losing (literally) her mother. JoeNathan Thomas is lovely as RJ, so natural and believable as this man who lost the love of his life and can't open himself up to love again (either human or baseball love). As directed by Brian Balcom, the play flows smoothly between scenes and decades, hitting all the right emotional notes (BTW it's funny too).

Scenic and props designer Katie Phillips must have had fun collecting all of the baseball memorabilia that populates Nessa's lived in apartment, that also doubles for other locations. Some familiar voices are heard in the recorded tracks of baseball games on TV (sound design by Anita Kelling). The smaller space of the black box theater at Bloomington Center for the Arts is a wise choice for staging this play; it allows for an up close and personal experience with this intimate story.

The best thing about baseball is that we get to start over every year. On Opening Day, anything is possible, and this could be the year. I suppose the same thing could be said about love. A month and a half into the season, my beloved Twins have (almost) the best record in baseball, and I'm all in. They could very likely end up breaking my heart again, like they have so many times in the past. But right now, I truly believe that this could be the year, that 28 years after their last world championship, the Twins could do it again.

If you're a fan of family drama, or mysteries, or baseball, or two-handers, or smartly written plays that explore emotions in a new and interesting way, Tinker to Evers to Chance is for you. It's playing through May 26 at Bloomington Center for the Arts.