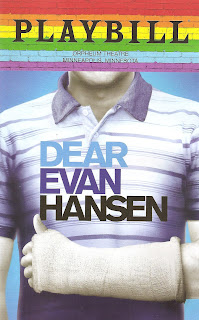 Two and a half years after debuting on Broadway (where it's still playing), the six-time Tony-winning smash hit musical Dear Evan Hansen has arrived in Minnesota. For the next two weeks, Evan and friends will be found at the Orpheum Theatre on Hennepin Avenue in Minneapolis. I was lucky enough to see the show on Broadway, starring Ben Platt in an unforgettable performance that won him Tony, and was totally enraptured by this thoroughly modern musical. Two years later the show and this touring cast are still fantastic (even if the Orpheum is too big of a venue for this intimate of a story). The small-cast non-flashy musical deals with pretty serious issues like suicide, mental illness, grief, and the dangers of social media, although not without humor and a fantastic Pasek and Paul score. Most importantly, it delivers a message of connection and hope that this world needs.

The title comes from an assignment that Evan receives from his therapist, to write a letter of encouragement to himself. "Dear Evan Hansen, it's going to be a good day, and here's why." Spoiler alert: it's not a good day for this friendless young man dealing with crippling anxiety. But after a tragedy at school, and a series of misunderstandings and outright lies, Evan ends up getting everything he ever wanted - friends, a girlfriend, a family, popularity at school, and a purpose. But the price paid by him and those around him is high, and things get worse before they get better. Despite his bad choices, I have great empathy for Evan. He's just a troubled kid who wants to be seen, heard, and loved, and his actions bring about a greater awareness that every human needs that, in the world of the play and in the audience. This musical appeals to the outsider in all of us (or maybe it's just me).

On opening night, alternate Stephen Christopher Anthony (who regularly performs at matinees) played the title role, filling in for Ben Levi Ross. He gave a terrific performance, fully embodying both the adorably awkward humor of the character and the really dramatic, devastating moments. This is an emotionally and vocally challenging role (singing and crying and crying and singing!), and Stephen pulls it off beautifully. The really tight ensemble of eight talented actors includes Jessica Phillips as Evan's mom, with a tear-inducing rendition of "So Big/So Small;" Marrick Smith as another troubled teen Connor; the lovely voiced Maggie McKenna as Evan's potential love interest Zoe; Aaron Lazar and Maggie McKenna as Connor and Zoe's parents; and Jared Goldsmith and understudy Ciara Alyse Harris as Evan's school friends, adding some much needed humor.

The set is super cool and fitting for this story that is so much about social media, the connections it can foster and the feelings of loneliness and unworthiness it can engender. As I wrote about the Broadway production, "The show is smartly and dynamically staged (by director Michael Greif, who also brought us RENT, Next to Normal, et al) on a modern set with social media images and videos projected everywhere (scenic design by David Korins, projection design by Peter Nigrini)." Small tableaux of a bedroom or living room smoothly glide in and out when necessary amongst moving vertical panels. There's a lot of movement in the show, but also some lovely quiet and intimate character moments.

What I called in my original review "a brilliant new, original, and thoroughly modern musical about grief, loneliness, the pain of growing up, and finding connection in the social media age" continues at the Orpheum through June 9. Click here for info and tickets, including details about the daily lottery.