"Another Revolution" by Market Garden Theatre at the Crane Theater 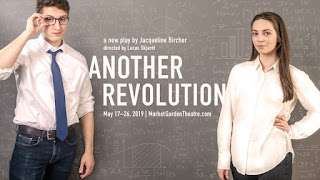 Judging by the mathematical symbols and equations painted on the floor and wall of the Crane's studio theater, I was expecting Another Revolution to be a math play (which I love, BTW). But this new play by Jacqueline Bircher, produced by Market Garden Theatre, is less about math than it is about science, and it's less about science than it is about friendship, politics, protest, war, and coming of an age in a tumultuous time. The tumultuous time in this case is 1968, but it's not too hard to translate it to today's world, which has plenty to protest and is still sending young people to war. In addition to math plays, I also really love two-people-sitting-in-a-room-talking kind of plays, and that's what this play is. It's like eavesdropping on a conversation between two specifically drawn characters who couldn't be more different, but find common ground, and maybe even friendship, when forced to spend a few months together. This is also one of those plays where nothing really happens, and everything happens. Both are true. I left the theater looking at the sky differently than when I walked in. What more can you ask of theater than a discussion of ideas big and small, and a different outlook on the world?

The play takes place in a Columbia University science lab in January of 1968. Ecologist Kat is upset when theoretical physicist Henry is assigned her lab, and they have to share. Henry performs "thought experiments," Kat grows plants, a perfect metaphor for their personalities. Kat wants to save the planet from climate change (yes, we knew about it in 1968, if only we had listened to the Kats of the world), listens to this new band called the Velvet Underground, and participates in protests against the Vietnam War and against the University's involvement in research that contributes to it. Henry can't be bothered with what's happening on earth, a very interesting yet insignificant part of the universe, and is more concerned with what's happening in space. Through a lot of debate, discussion, and bickering, as well as some personal crises for both of them (she has a brother fighting in Vietnam, he's bound to be drafted if he fails out of another school), they grow up a little, and their worlds expand because of each other.

This two-hander is very well cast with two actors who fully inhabit their characters and have a believable connection. Luke Harger (who looks like he stepped right out of a 1968 yearbook) is adorably awkward as Henry, but also shows us there's more beneath the nerdy veneer. Stanzi D. Schalter is strong and tough as Kat, but also portrays her vulnerable side. An interesting feature of the play is that we get to hear letters each writes to their best friend (Kat - her brother; Henry - the universe, so adorkable!), which gives us a deeper insight into the characters.

Kudos to the entire design team for creating this specific world in the small black box theater, including scenic designer Leazah Behrens, responsible for all of those equations (I recognized at least one of them) and the simple furniture that looks at home in a 1968 college lab; lighting designer Jacob Lee Hofer for subtle changes that define scenes and differentiate character monologues; sound designer Kassia Lisinski for the selection of songs from the late '60s played during every scene transition, so good I wish I had the soundtrack; and the uncredited costume designer for Kat's student hippie but not too extreme look, and Henry's plaid suit jacket and tie. And of course director Lucas Skjaret for pulling the whole thing together for a final product that's funny, sweet, touching, and meaningful.

You have four more chances to catch the Revolution at the Crane Theater in Northeast Minneapolis this weekend. If you like two-person talky plays about science and politics in 1968 with great music, like I do, this one's for you. Click here for more info and to purchase $14-20 tickets.