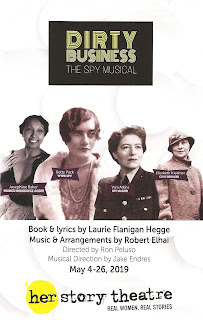 As the final installment of their HERstory spring - true stories by women about women - the History Theatre brings us a new original musical (my favorite thing). Dirty Business: The Spy Musical, with book and lyrics by Laurie Flanigan-Hegge (Sweet Land) and music by Robert Elhai (C., The Lady with a Lap Dog), tells the stories of mostly forgotten female heroes of WWII. The piece was first presented at History Theatre's "Raw Stages" festival of new works last year, when it showed great promise, and it's exciting to see it now as a full production. Dirty Business is a whirlwind journey through pre-WWII Europe, with many players and missions, that's fun, educational, and inspirational.

The Minnesota connection here is Betty Pack, a Minneapolis socialite who married a man who worked at the British embassy. She traveled with him throughout Europe in the 1930s, meeting lots of important men and picking up secrets along the way. She eventually became a spy for the British, giving them information about their enemies. Betty's story is interspersed with those of other women who fought against the rising tide of fascism in the 1930s, including British intelligence officer Vera Atkins, Amercan codebreaker Elizebeth Friedman, and singer Josephine Baker, who worked as an agent for the French resistance.

The play begins at a crucial moment for Betty, trying to secure some important codebooks, then flashes back and tells all of the women's stories until we get back to that same point again. We travel quickly through time and place, aided by video projections of date and location. Because it's such an epic story, and these women's lives and work was so complicated, we don't go too deep into anything, and it's not always clear who's who and what's what. But we get the general gist - these women did as much to fight the Nazis and fascists as the soldiers on the ground, often with much personal sacrifice and little credit. Elizebeth used her intelligence and gift for seeing patterns and cracking codes, Vera used her skills for organizing and training agents, Josephine used her musicianship and charm to disarm her enemy, and Betty used her sexuality to seduce secrets out of men, for which she showed no shame. Nor should she; each of the women used the tools available to them to fight the enemy.

Kendall Anne Thompson leads the talented cast as Betty, embodying both her ruthless side, and her vulnerable side as she sometimes fell in love with her marks, conflicted between her feelings and her duty. The other women are fantastic as well - Jennifer Baldwin Peden as Vera, Melanie Wehrmacher as Elizebeth, and Timotha Lanae as Josephine. Seven actors portray all of the men in these women's stories, from Nazis to politicians to spies, and all ably and quickly switch from one role to the next (Gary Briggle as Churchill? Yes, please!).

I really enjoyed Robert Elhai's score, which covers a range of styles, from Josephine Baker's jazzy Parisian numbers, to the beautiful ballad "The Roses of Warsaw," to the catchy "Honey in the Trap" (which is still caught in my brain), to the rhythmic techno-y style of the codebreakers' song. Music flows in and out of dialogue seamlessly, and is well played by the five-piece offstage orchestra led by Music Director Jake Endres and gorgeously sung by the entire ensemble.

The many settings in the play are represented by video projections (designed by Miko Simmons) of the interior or exterior of the grand locations. Joel Sass's two-level set with a staircase on either side provides many locations for scenes to play out. The cast is dressed in beautifully detailed period clothing that easily transitions from one character to the next (costume design by E. Amy Hill).

Dirty Business: The Spy Musical continues through May 26 at the HERstory Theatre in downtown St. Paul. It combines the thrill of a spy story, the fun of a new musical, the warning of complacency in the face of threats to democracy, and the inspiration of these heroines whose stories deserve to be told.