"Sea Cabinet" by Theatre Elision at the Southern Theater 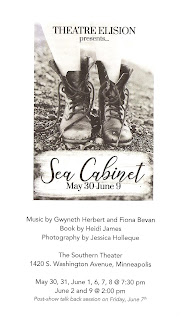 If you're not aware of new(ish) #TCTheater company Theatre Elision, you haven't been paying attention. To me, anyway. I've seen just about everything they've done since their debut two years ago and continue to be impressed with how they're filling a niche we didn't even know we were missing - small-cast one-act original or rarely performed musicals with mostly (or all) female cast and creative team. Get on board! For their penultimate show of their second full season, Elision has discovered a charming song cycle written by British singer-songwriter Gwyneth Herbert and are bringing it to the Southern Theater in Minneapolis - the very first US production. Sea Cabinet is a collection of lovely, melodic, interesting, unique songs around a common theme of the sea, and specifically a woman walking along the sea collecting objects. It's beautifully performed by this four-person all female cast with spot on design and direction under the gorgeous historic arch of the Southern. Truly a perfect 75 minutes of music-theater.

The composer describes the piece thusly: "Every day, a woman walks the beach alone, obsessively collecting every discarded and washed up object that she finds. She takes them home to catalogue each one with the care and rigour of a scientist. The artefacts are then placed in 'The Sea Cabinet', and every one sings with the memory of a secret sea-set story." Four women dressed in roomy dresses, cozy cardigans, and sturdy boots guide us through the dozen songs which are each a little story in themselves. Interesting rhythms, lovely melodies, gorgeous harmonies, some melancholy ballads, some fun and upbeat numbers - a really wonderful collection of songs (the full album is available on YouTube - give it a listen to get a taste of the show). The songs are tied together with short bits of poetic dialogue spoken alternately by the four women. There's no real plot or throughline story, rather variations on the theme of the sea, love, and loss.

The cottage by the sea is represented on the Southern stage by set and prop pieces, as well as images and video of the sea, and women by the sea, projected onto the brick wall at the back of the theater. A table littered with objects, a few cabinets, a cozy armchair, a piano, and a myriad of other instruments fill the center of the space. Because not only do Bex Gaunt, Christine Wade, Emily Dussault, and Vanessa Gamble sing beautifully individually and especially together, they also play multiple stringed and percussive instruments. This is in addition to the three-piece band led by music director Harrison Wade on keyboard (and clarinet!). The sound of all these elements combined is gorgeous, although I wish it would have been clearer; the body mics sometimes caused interference, and I would have loved to hear the singers' voices in the intimate space without the interference of amplification.

Sea Cabinet is a lovely and unique collection of songs, beautifully performed, and the whole thing is inventively staged with good use of the entire space of the theater by director Lindsay Fitzgerald. Once again Elision brings us a piece of music-theater that you really can't hear anywhere else. So if you're a fan of musicals who's tired of repeated performances of the same old musicals, check this one out. And then make plans to see a remount of the darkly hilarious Ruthless!, the inaugural production at Theatre Elision's brand new theater space in Crystal.

Sea Cabinet continues at the Southern Theater through June 9 only, with tickets just $20 (or free for members of the Southern's ARTshare program).