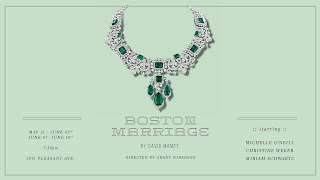 Last night was a perfectly charming evening from start to finish. I attended the first official production from new #TCTheater company Arrow Theater, spearheaded by #TCTheater artist Grant Sorenson who last December independently produced Vincent River, a beautifully devastating play about the aftermath of a horrific hate crime. David Mamet's Boston Marriage is the complete opposite – a light and frothy comedy. The site-specific production is staged in the gorgeous Maison Bodega (run by Bodega Ltd.), in a room as light and airy as a delicate pastry. Free wine was served to the mingling audience dressed as if for a garden party, creating a festive atmosphere. Unfortunately the rest of the small audience short run is sold out, but if these two shows are any indication, Arrow Theater needs to be on your radar. Two such different plays, both beautifully executed by Grant as director and the cast and team.

Wikipedia tells me that Boston Marriage is set around the turn of the last century, but with the modern clothing and design of this production it could be set today, except for some of the language and references. "Boston Marriage" is a term used to refer to two women who live together, either platonically or romantically. For Anna and Claire, the relationship is definitely romantic. And complicated. Claire arrives at Anna's lovely home, paid for by a married man to whom she is mistress, to tell her that she's in love with another woman. A much younger woman, so young she needs a chaperone. Claire begs Anna to let them use her home for a rendezvous, and Anna reluctantly agrees, but only if she can watch and/or facilitate. Things go awry when they discover who this young woman is, and there's much ado about a necklace. The women develop a scheme to get what they want, but it turns out what they really want is each other. Even though they bicker, tease, and debate with the most delicious wit, they do love and know each other well. Oh, and there's a Scottish maid with troubles of her own, alternately ignored and belittled by her mistress.

The play is staged in an upstairs room surrounded by windows, with elegant period furniture in the center space and two rows of chairs on the other side for the 20-30 audience members. The only lighting is that from the gorgeous Minnesota summer evening. Just when it begins to get a little dark, the maid lights candles all around the room, and the rest of the play is performed in the dusky candle-light, which is truly the best lighting. The women are dressed in chic and elegant modern clothes, the maid in a typical maid’s outfit.

The cast is sheer perfection (and all have appeared on various stages around town, from small to big). Michelle O'Neill is just divine as Anna, delivering all of her juicy lines with relish, often lapsing into delightful melodrama or exaggerated accents. She's well matched in Christine Weber as Claire, exasperated and amused by Anna at the same time. The two actors have a wonderful rapport and chemistry. Completing the cast is Miriam Schwartz, stealing every scene she enters as Anna's put upon Scottish maid - serving tea, weeping, telling stories of her Grandma, trying to be heard.

This is the kind of unique, intimate, thoughtful theater that I love, and David Mamet has written such a smart, clever, supremely witty play that I wonder why I've not seen or heard of it before. It was a truly lovely evening and I look forward to more of the same from Arrow Theater.