"The Pillowman" by Theatre Coup d'Etat at SpringHouse Ministry Center 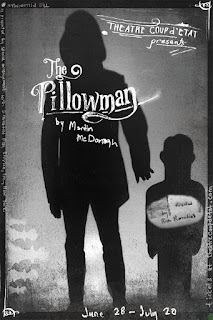 Theatre Coup d'Etat's production of The Pillowman is the third play by Irish playwright Martin McDonagh that I've seen, and the darkest and most twisted. And that's saying something, considering I've seen The Beauty Queen of Leenane about an extremely unhealthy mother-daughter relationship and A Behanding in Spokane about a man in search of his missing hand. McDonagh has a knack for writing really fascinating characters, darkly funny dialogue, and extremely twisted situations. All of those are true about The Pillowman (best play Tony nominee in 2005), which explores the brutal interrogation of a short story writer whose stories of violence against children start coming true. With a fantastic cast, inventive design, and an intimate performance space, Theatre Coup d'Etat brings this creepy story to life almost too viscerally.

The entire play takes place in an interrogation room as the writer Katurian Katurian (so weird, right?!) is being interrogated by good cop Tupolski and bad cop Ariel. We soon learn that Katurian is a short story writer, and a disturbing number of his stories deal with violence against children. Coincidentally, two children have recently been murdered in a manner similar to his stories, and a third is missing. Katurian claims to have nothing to do with the murders, despite evidence found in his home. Katurian's mentally disabled brother is also being questioned in the room next door, and eventually the two brothers are allowed to talk to each other. We also get to hear several of Katurian's stories, including "The Pillowman," about a man made of pillows who visits people who are about to commit suicide, then travels back in time and convinces their child selves to do the deed and avoid a lifetime of misery (I told you it was dark!). Some things happen I won't spoil for you here, but we do eventually get some sort of resolution to the mystery.

Coup d'Etat often performs at SpringHouse Ministry Center, but this is the first time I've seen them in a basement room - a good choice because the high ceilings in the upstairs spaces wouldn't give the necessary close, almost claustrophobic feel. The play is performed in front of an almost Pollock-esque abstract backdrop, which when lit up from behind is used to illustrate Katurian's stories with shadow puppetry, a charming and disturbing effect. Sounds of torture can be heard from next door, and the pre-show and intermission music is haunting, including some kinda scary time announcements. (Lighting design by Mark Kieffer, sound design by Matt Clarke, set and puppet design by Tyler Stamm.)

Rich Remedios directs the strong five-person cast (including a brief but memorable appearance by Meghan Gobler) and keeps the tension high throughout the show, but not without moments of humor. Tyler Stamm's cool, cruel, in control Tupolski contrasts nicely with James Napoleon Stone's more unhinged and emotional Ariel, evident even in their clothing - a crisp clean suit for Tupolski and rumpled shirt with the sleeves rolled up for Ariel (costumes by Chelsea Wren Hanvy). Song Kim portrays the sweet and simple Michal, with a brotherly chemistry with Corey DiNardo's Katurian, who nicely plays the character's range from pitiable interogee to... well, the kind of person who writes stories about violence against children.

I expected to feel sympathetic towards the man living in the totalitarian state being viciously interrogated, but it's not that simple. The man is not entirely innocent either, and maybe the interrogators are just doing what they need to do to prevent further violence. Coup d'Etat provides this warning: "This show includes graphic violence, elements of torture, disturbing adult content, flashing lights, and simulated gun use." Go at your own risk. But if you do go, you'll see a smartly written, darkly disturbing, well performed play. Continuing through July 20 at SpringHouse Ministry Center in Uptown.