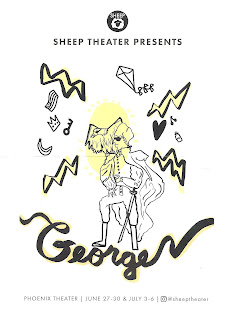 Celebrate Independence Day with Sheep Theater, who is bringing back their delightfully wacky original comedy George for the July 4th weekend. This show was my first introduction to Sheep four years ago, with their motto of "Original plays. Deranged sincerity," and I've enjoyed many moments of deranged sincerity since. At the time I called George "funny, clever, and irreverent, with jokes about the many things America is best at (giving speeches, celebrating) and how it's OK to lie if it's for the good of the country." Revisiting it, it gave me all of the patriotic feels, watching a bunch of goofballs make fun of our founding fathers (and mothers!) in the most lovingly irreverent way, celebrating all of the freedoms we hold dear, and remembering the ideals this country was founded on (which is easy to forget these days). As my great-grandmother, daughter of Polish immigrants, used to say - hooray for the 4th of July!

George is more or less about those famous events of 1776, with much liberties taken for the sake of comedy. Our George Washington (you can call him Papa, not King) is a lovable doofus (played by the playwright Joey Hamburger). When he takes too much sleeping medicine and his two squires John Hancock (Erika Kuhn) and Thomas Jefferson (Michael Rogers) accidentally kill him, they prop him up and pretend he's still alive and leading the fight for independence, leading to some beautifully choreographed and performed physical comedy. But really it's Hancock and Jefferson rallying the troops and wooing heiress Liberty Freedombell (Iris Rose Page), whose money they're hoping can help fund the revolution. Despite this mess, and the interference of the super sneaky spy Benedict Arnold (Robb Goetzke) working for King George (scene stealer Madeleine Rowe), our heroes prevail after a fabulously fun battle of swords, guns, and fists.

If you're staying in town for the holiday and are looking for some fun and festive theater to celebrate the occasion, look no further than George. Performances are at 7:30 Wednesday through Saturday at the Phoenix Theater in Uptown (click here for more info).