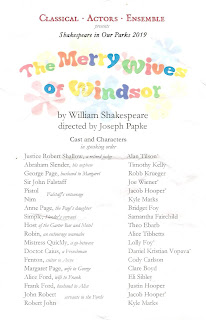 Summer in Minnesota means outdoor theater. Every year, Classical Actors Ensemble braves the elements (which last night included excessive heat, bugs, and a train) to bring us Shakespeare as it was always meant to be - fun, playful, accessible, and engaging. They're in the final weekend of this year's production, The Merry Wives of Windsor. I saw the show at a park less than five miles from my house (which, as a suburbanite, always makes me happy); tonight they're performing in St. Paul's Newell Park, with two final shows in Minneapolis parks this weekend (click here for details). Bring chairs, a blanket, an umbrella, a picnic, sunscreen, bug spray, water, and settle in for a fun, colorful, silly show.

I've not seen Merry Wives before, although I did see a version of an opera based on the play (by one of my other favorite outdoor theater troupes, Mixed Precipitation, who this year is performing The Clemency of Tito’s Tennis Club: A Picnic Operetta at area parks and gardens August 11 - September 29). The plot centers around Sir John Falstaff who, in need of money, decides to woo two wealthy married women. But he doesn't count on them being smart enough to see through the ruse, and turn the tables on him. One of the merry wives has a daughter with three potential husbands, and there are the usual assortment of smart and wily Shakespearean servants to help stir the plot. It's a whole lot of silly fun, performed in a broadly comedic style by the large and likable cast.

The show seems to be set in the '80s, judging by the fashion and the bright colorful set (costume design by Lolly Foy, scenic design by Justin Hooper). Some of the cast double as the band for a few (too few) musical interludes, as well as a pre-show concert. Under the direction of Joseph Papke, the entire 16-person cast performs playfully and energetically (especially remarkable under heat advisory conditions), their words clearly heard throughout the outdoor audience despite the chirping of birds, planes flying overhead, and people biking past. Highlights include Alan Tilson as the good Justice Shallow, Timothy Kelly as the adorably flustered preppy suitor, Joe Wiener as the fool of a Falstaff, Bridget Foy and Cody Carlson as the sweet young lovers, Lolly Foy as the meddling Mistress Quickly, Clare Boyd and Eli Sibly as the titular wives, and Justin Hooper, whose performance as one of the possibly cuckolded husbands was so hilariously over the top I was afraid he'd burst a blood vessel!

Take advantage of two of the best things about living in Minnesota - theater and the beautiful outdoors. They go together surprisingly well, despite the logistical issues and uncontrollable elements. But that's what makes it fun, unpredictable, and surprising. Your window is closing to see these Merry Wives of Windsor, but if you're in the Northeast Metro you can check out another company doing this and a few other Shakespeare plays outdoors, Shakespeare and Company, performing at Century College in White Bear Lake through August 4.