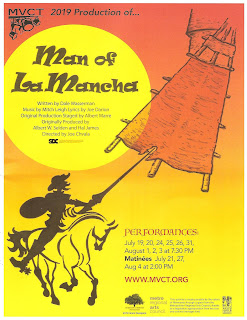 This is my annual PSA to support your local community theater! Especially if one of your favorite #TCTheater director/choreographers is involved. I'm lucky enough that Joe Chvala (founder of the dance company Flying Foot Forum) is directing and choreographing a production for Mounds View Community Theatre for the second time (after helming a delightful H.M.S. Pinnafore two years ago). This Man of La Mancha, playing at a middle school a mile from my house, is as good as what I see on professional stages around town. Of course there's fantastic dancing in Joe's trademark rhythmic percussive style, but he's also assembled a really talented cast, most of them unknown to me, with impressive set design, all of which combines for an all around funny, engaging, and inspiring show. This story of the idealistic noble knight fighting injustice in the world is one that we always need to hear.

As you might remember, Man of La Mancha is set in a prison during the Spanish Inquisition, where playwright Miguel de Cervantes (author of the early 17th Century novel upon which its based) must defend himself and his play about Don Quixote, the foolishly idealistic knight in an era when knights are going out of fashion. The show begins when Cervantes enters and begins telling his story, enlisting the other prisoners/detainees to take part, who do so reluctantly at first but with growing enthusiasm. Within the story of Don Quixote, we watch as "the maddest wise man, or the wisest mad man" (who is actually the deluded elderly Alonso Quijano) looks for dragons to fight and fair ladies to rescue, with his eager squire Sancho Panza. Everyone around him, including said fair lady Aldonza, whom he calls Dulcinea, thinks he's nuts. But many grow to be on his side as they see his pure motive - to fight for what's right. Some of his family and friends attempt to shake him out of the illusion and back to reality, which they succeed in doing, to his detriment. In the end he leaves those he has touched better for it, like Aldonza who calls herself Dulcinea and sees herself as he saw her, as they continue Don Quixote's fight for a better world.*

The stage at Chippewa Middle School has been transformed into a Spanish dungeon, complete with a massive set of stairs that lowers down onto the stage like a drawbridge. Rustic looking boxes, barrels, tables, and chairs are cleverly used to create the world of the play-within-a-play. My favorite are the horses - a sawhorse on top of a wheeled cart pulled by tap-dancing ensemble members wearing horseheads. Period costumes range from peasant garb to gorgeous gowns, while the addition of pieces transform the prisoners into players in the story (set and lighting design by Robin McIntyre, costume design by Cindy Forsgren).

The ensemble and off-stage seven-piece orchestra sound heavenly on this beloved score, with vocal direction by Blake Brauer and orchestra direction by Christopher Stordalen. Billy Krager is truly wonderful as Cervantes/Quijano/Quixote - sincere, open-hearted, and with a beautiful voice. Bradley Johnson brings the humor as the adorably loyal Sancho Panza, and Cassie Utt is fierce and lovely as Aldonza/Dulcinea. They're surrounded by a large and talented ensemble, no weak links in the bunch, as they create this magical world. They perform Joe Chvala's thrillingly rhythmic body-slapping foot-tapping percussive choreography like pros.

Man of La Mancha continues through August 4 in North Oaks, and if you're in the area, I highly recommend you check it out. A beautiful and inspiring show, well performed with heart and passion by members of your community - what's better than that?! Visit their website to order $20 tickets - a bargain.

This show always leaves me with such a hopeful feeling, that maybe someday good can triumph over the many evils in the world. I'll leave you with what I wrote about Theater Latte Da's production in 2017:

Of course we can't just bury our head in the sand or a story when the world gets tough. But sometimes it helps to immerse ourselves in a fictional world where things make sense, where noble knights fight against tyranny and win. Sometimes it's the escape we need to be able to get up in the morning and face another day of hurricanes, senseless tweets, horrific violence, and damaging legislation. And then take up our fictional swords, mount our invisible horses, and tilt against the very real and scary windmills in the world.*

This is my quest, to follow that star,
No matter how hopeless, no matter how far
To fight for the right without question or cause
To be willing to march into hell for a heavenly cause

And the world will be better for this
That one man scorned and covered with scars
Still strove with his last ounce of courage
To fight the unbeatable foe, to reach the unreachable star


*Some text borrowed from what I wrote about Theater Latte Da's production in 2017.