"42nd Street" at the Ordway Center 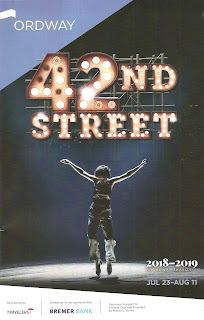 Washington Street in downtown St. Paul, the address of Ordway Center for the Performing Arts, is the new 42nd Street. The Ordway Original production of 42nd Street is an expertly updated classic that in three words is: Fan. Freakin. Tastic. I've seen the show several times, but never like this. The show opens with the above familiar refrain, the curtain lifting a few inches to reveal feet moving in classic tap-dancing style. Then producer Julian Marsh says something along the lines of - we've done that before, let's do something new. What follows is something entirely new, while still paying homage to the beloved 1933 movie (adapted to the stage in 1980). These dancers (comprised of local and national talent) are some of the best I've ever seen performing this whirlwind tapping, the lead and supporting actors are divine, and the music is familiar yet excitingly modern. If you're a fan of music-theater, get yourself to "naughty, bawdy, gaudy, sporty" Washington Street as soon as you are able! But hurry, the show closes on August 11 after a too-short three-week run (click here for all the deets).

42nd Street is one of those musicals about musicals, in which an unknown becomes a star. The young, naive, and talented Peggy Sawyer arrives in NYC from Allentown, PA and auditions for a new musical called Pretty Lady, directed by the famous Broadway director Julian Marsh. After a few mishaps, and with the support of her new friends in the show, she lands a spot on the chorus line. But when star Dorothy Brock is injured, Peggy is chosen for the role due to her natural talent, and must learn all of the music, scenes, and steps in 36 hours. She does it, because this is a musical. A musical that celebrates everything we love about musicals, including the blood, sweat, tears, and love that go into creating one.

Director Michael Heitzman and choreographer Jared Grimes paired up on 42nd Street for Chicago's Drury Lane Theatre about a year and a half ago. They've brought some of the elements of that production to St. Paul, including the new orchestrations and arrangements by Everett Bradley that make these familiar songs from the '30s feel fresh and a little bit funky. A few of the cast from Drury Lane have also come along to St. Paul, including the fabulous Kimberly Immanuel as Peggy and the charming Phillip Attmore as Billy. But most of the cast is new, and just under half are local, including featured actors Tyler Michaels King, clearly having a ton of fun hamming it up as Pretty Lady writer Bert Barry after a couple of emotionally heavy roles with Theater Latte Da; Jamecia Bennett with a few of her signature roof-raising vocal moments as the other half of the show writing team; and T. Mychael Rambo*, who sadly doesn't get to showcase his beautiful voice in the mostly non-singing role of Dorothy's sugar daddy.

Which brings me to the headliners, super talented NYC-based actors Tamara Tunie and Jarrod Emick as Dorothy and Julian. Tamara was on my dear departed soap As the World Turns for many years, along with roles on other NYC-filmed shows like Law and Order: SVU. It was such a thrill for me to see her in this show, and to learn that she's not only a fantastic dramatic actor (and successful Broadway producer), but also a beautiful performer of music-theater! Her Dorothy is a bit of a diva, but one with heart and humanity. Jarrod is a charismatic Julian, with gorgeous vocals as well.

But honestly, the true stars of this show are the dancers and Jared Grimes' incredible choreography. I can honestly say it's the best tap-dancing I've ever seen. Because it isn't just the traditional steps that we've seen before (which is thrilling in itself). Instead, he's taken all of those traditional tap influences and elevated them, funking it up and adding modern influences, creating something truly spectacular. And this ensemble performs these fast and furious steps seemingly effortlessly; each one of them is perfection and put together they're breath-taking. The Act I closer "We're In the Money" is an absolute highlight as the dancers dance on gold coins dressed all in gold, coins flying everywhere, some of the men dancing their gold spats right off their feet! These dancers are fierce, athletic, graceful, expressive, and incredibly fun to watch.

The Ordway's stage has been transformed to gritty NYC (because 42nd Street/Times Square used to be gritty before it was Disney-fied), with a couple levels of scaffolding and stairs that the cast is constantly running up and down. Projections behind the scaffolding are beautifully (i.e., not over) used, almost blending in with the onstage set (scenic and projection design by Paul Tate dePoo III). Emilio Sosa's period costumes are fun, colorful, gorgeous, and still allow the dancers freedom of movement. And did I mention the gold spats?! Last but not least - this incredible nine-piece onstage band led by the Ordway's own Raymond Berg (with local music legend Sanford Moore on keyboard). Situated on the balcony, they feel like an integral part of the show, which they are, and sound incredible.

Written in 1980 based on a 1933 movie, the show has some slight problematic elements (the song "Dames," ugh), most of which are solved by small but essential tweaks, such as changing who is singing the song, or in the scene where the male director kisses the female actor to inspire her - she now kisses him, which reads so much better in 2019. This is how you do a fresh, modern update of a classic while still staying true to the spirit of the original. From the music to the choreography to the directorial choices, this is an exciting, fresh, modern 42nd Street!

*Fortunately there was an opportunity to hear our beloved T. Mychael Rambo sing these songs at a cabaret night at the Dakota on August 5. Click here for my recap and photos of this cabaret that showcased the many and varied talents of this ridiculously talented cast.