A Cabaret Featuring the Cast of the Ordway's "42nd Street" 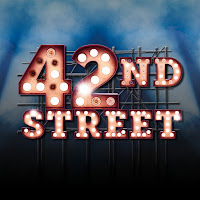 Friends, I had the most amazing night at the Dakota Jazz Club last night. The cast of the Ordway's "fan-freakin-tastic" 42nd Street presented a cabaret that lasted for over three hours and showcased the many varied talents of this ridiculously talented cast. As I overheard in the bathroom (a great place to gauge audience reaction), the cabaret was almost better than the show itself. I have decided that the cast of every musical needs to do a cabaret show (this is the 4th at the Dakota, after the casts of Theater Latte Da's Hedwig and the Angry Inch, Park Square's Marie and Rosetta, and the Jungle's Lady Day at Emerson's Bar and Grill). It was a particularly genius idea for this cast that is overflowing with talent from every single member. They get to show off a lot of that talent in 42nd Street, which features tap dancing like I've never seen before, but there's so much more to them all. From poetry (Annie Jo Ermel) and spoken word (Phillip Attmore), to freestyle rap (Rush Benson), to country music (Jarrod Emick), to crooning standards (Tyler Michaels King, Tamara Tunie, Kimberly Immanual), to insane tap-dancing (several members of the cast), to the musical stylings of Music Director Raymond Berg and the band, to the most charming and genial hosting (T. Mychael Rambo, underused in 42nd Street), to whatever magic it is that Jamecia Bennett creates that blows the roof of of whatever room she's in and brings the crowd to their feet, last night was a display of talent unlike anything I've seen before. It truly will go down as one of the best and most memorable evenings of musical performance I've ever experienced.

Bummed that you missed this amazing night? Dinna fash, you still have a chance to see this talented cast in 42nd Street at the Ordway. But hurry, the show closes this Sunday! Click here for more info and tickets.

Here are a few photos from the evening: